‘Serious’ errors in reporting of loans to bank affiliates 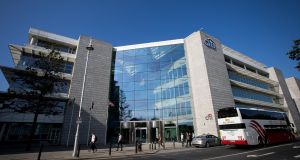 Citibank Europe became US banking giant Citigroup’s main banking entity in the European Union in early 2016, after the activities of its Citibank International unit in the UK were folded into the Dublin-based business.

Citibank Europe became US banking giant Citigroup’s main banking entity in the European Union in early 2016, after the activities of its Citibank International unit in the UK were folded into the Dublin-based business.

The Central Bank said on Monday that months after the merger went through, Citibank Europe identified and reported breaches of the so-called regulator’s code of practice on lending to related parties. These related to the bank’s reporting of loans to senior managers.

Following a regulatory request for further information, Citibank Europe also found “instances of unapproved lending to senior management and a prolonged and serious error in its reporting, under the code, of loans to related parties which were affiliates,” the regulator said.

A subsequent Central Bank investigation revealed that for a period of two years and eight months, the firm did not have necessary policies and processes in compliance with the code.

Specifically, it found that Citibank Europe “failed to seek or obtain prior approval of the board or the related party lending committee prior to advancing and/or varying the terms of credit card loans to three individuals who were related parties,” it said.

The Central Bank said that its policies and processes “are important to ensure that loans or any variation of loans to related parties were granted with the necessary management oversight and supervision.”

Citibank Europe’s inaccurate reporting meant that supervisors did not have the necessary visibility to monitor the firm’s exposures to related parties, it added.

Lenders are required to obtain prior approval of their board, or a subcommittee of the board, before entering into or varying loan transactions with related parties including directors, senior managers, significant shareholders of the firm and other connected parties.

The investigation found, however, that there was no evidence that a related party received more favourable terms than loans to an unrelated party.

A spokeswoman for the bank said: “Citibank Europe plc is pleased to resolve this matter, which it initially informed the Central Bank of. It did not affect clients.”

The spokeswoman declined to identify the three individuals.

The fine brings monetary sanctions handed out by the Central Bank over the past decade to more than €66 million, after the regulator took a more intrusive approach to regulation in the wake of the financial crisis.