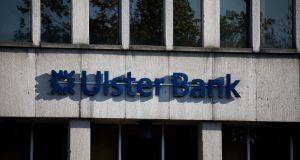 Ulster Bank: a scandal around its tracker loans fuelled the move to establish an Irish Banking Culture Board. Photograph: Tom Honan

The Irish Banking Culture Board being set up by lenders in the wake of the tracker mortgage scandal is a “self-regulatory” body that will not work unless the Central Bank, unions and consumer groups also have stakes, the Financial Services Union (FSU) has said.

“If the banks were serious about culture change, rather than setting up a self-regulatory body, they would support the FSU’s call for a stakeholder-led culture board on banking with the equal participation of management, the Central Bank, FSU and consumer groups,” said Gareth Murphy, the union’s head of campaigns and industrial relations.

“We have seen repeated scandals within the sector and relying on self-regulation will not change this.”

Still, the FSU is encouraging its members to take part in a survey that the banking culture board’s project director Marion Kelly initiated this week, looking at issues such as whether bank staff see their firms acting in customers’ interests, or if individuals can speak up without fear of negative consequences.

The Irish Banking Culture Board is being built along the lines of the Britain’s Banking Standards Board, and has the stated aim of fostering “a customer-focused culture within the sector in order to rebuild trust and confidence”.

Responding to the FSU’s call, Ms Kelly said: “Only change that comes from within the organisations themselves can be authentic and sustainable and this principle applies no less to the five founding banks in Ireland. Once established, the IBCB will be an entirely independent entity, led by an independent, non-banking chairperson.”

Ms Kelly said an upcoming public consultation process on the body will also seek the views of trade union leaders and consumer advocates.

Meanwhile, Grainne McEvoy, director of consumer protection at the Central Bank, said this week that the regulator is moving to a more intensive supervisory regime of banks from a consumer perspective.

“We are developing a new customer-impact model to help us determine which firms pose the greatest potential harm should conduct issues arise,” Ms McEvoy said on Wednesday.

Up until now, the Central Bank has focused more on a firm’s products when assessing risks to customers. The planned new approach will look at a company’s strategy, business model, culture, governance and systems when assessing conduct risks.

The Central Bank published a report into the culture of Irish banks in June after banks were found to have wrongly denied some 37,600 homeowners their right to a tracker mortgage or put them on the wrong rate entirely over the last decade. The study found that top banking executives retain too much of a crisis-era “firefighting” mindset to place customers at the heart of all decisions.