Making his mark in Cyprus 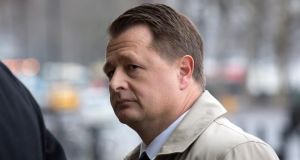 John Hourican: starting to make his mark as the chief executive of Bank of Cyprus. Photograph: Simon Dawson/Bloomberg

John Hourican is starting to make his mark as the chief executive of Bank of Cyprus, the crisis-addled institution he took over last October.

The Dubliner, a former head of RBS’s investment banking arm who quit after its Libor-rigging scandal, beat former Anglo Irish Bank boss Mike Aynsley to the top job at the bank, the pre-crisis institution of choice for Russian oligarchs.

Half of its balance sheet comprises impaired loans, so it has no capital to be wasting on operations abroad. Since arriving, Hourican has implemented a “scorched earth policy” with the bank’s overseas units. Hourican said this week the Bank of Cyprus would soon be looking for a buyer for its Uniastrum bank in Russia.

He has also sold its Ukrainian operations to Mikhail Fridman’s Alfa group, a minority stake in Banco Transilvania in Romania and it also lining up the sale of a £300 million UK loan book.

“We have no need for a retail bank in Russia,” said Hourican this week of the Uniastrum sale. “It doesn’t help us at our main bank in Cyprus. It has a very different clientele.”