Majority of RSA staff in Republic set for 2% pay rise 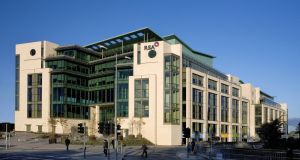 RSA building in Dundrum, Dublin: some 360 out of 410 staff employed by the company in the Republic will receive pay increases. Photograph: John Reid/Fennell Photography

Ireland’s biggest insurance group RSA has agreed a 2 per cent pay increase for the majority of its staff in the Republic following an agreement with the trade union Unite.

The Irish Times has learned that the pay rise will take effect in June and will apply to some 360 out of 410 staff employed by the company here. It is understood that the rise will not apply to senior executives.

This will be the first increase in pay for staff since 2012 and reflects the fact that RSA expects to return to profitability in 2016 after three years of heavy losses following the emergence of financial issues in 2013 that rocked the business.

This rise will not apply to RSA’s operation in Northern Ireland nor will it apply to staff in 123.ie, its Dublin-based subsidiary.

RSA is in the middle of a three-year operational plan covering the period up to 2017, which is designed to restore profitability and generate an acceptable return on capital for its listed UK parent group.

The loss in 2014 included a once-off exceptional charge of €48.8 million relating to restructuring costs and impairment charges, suggesting operational losses of €128 million.

While results for last year have not been released, RSA expected its operational losses to more than halve in 2015 followed by a return to profit this year as it regains momentum from the financial issues that emerged in 2013.

RSA has reduced its headcount in Ireland by 150 over the past two years as the business has been restructured following the emergence in 2013 of irregularities in its claims and finance functions, and issues around bodily injury claims.

This resulted in three senior executives being suspended and ultimately leaving the business, and a legal dispute with its former chief executive in Ireland, Philip Smith, which was settled for an undisclosed sum last month.