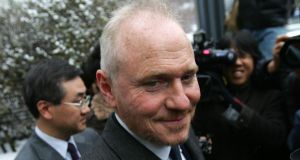 Lone Star, the Dallas-based private equity firm led by John Grayken, is understood to be the preferred bidder for “Portfolio 14”, a mixed bag of loans owed by over a dozen businesses, which formed part of the Project Evergreen sell-off by the liquidators of IBRC.

The portfolio is also thought to include loans relating to Acision, a mobile data company led by Russian-born billionaire Len Blavatnik, and also some pubs, apartments and other medium-sized businesses.

The portfolio reportedly has a par value of about €900 million, and includes an assortment of loan sizes from €100,000 to €70 million.

Lone Star has been scouring the Irish market for distressed asset sales this year. The Irish Times revealed yesterday that the company last week bought loans associated with 75 St Stephen’s Green in Dublin, a prestigious office block. It paid €75 million to Bank of Scotland (Ireland) for the loans, a discount of between 10 per cent and 20 per cent.

Recently filed accounts in the Companies Registration Office for Lone Star International Finance, the group’s Irish unit, show it invested $817 million in distressed asset deals over the last year. It made a loss last year of $2.8 million, but declared dividends to its US parent of $5.1 million.

TPG was co-founded by David Bonderman, the chairman of the budget airline Ryanair. TPG also holds a stake in the airline.

Cerberus earlier this year bought the waste company Greenstar, once owned by NTR, out of receivership. It is represented on the ground in Ireland by Ron Bolger, a former chairman of the old Telecom Éireann.

Sankaty is a unit of Bain Capital, founded 30 years ago by Mitt Romney, the former US presidential candidate. Mr Romney sold out of Bain number of years ago.

A statement issued last night by KPMG also gave an update on the progress of some other IBRC loan sales.