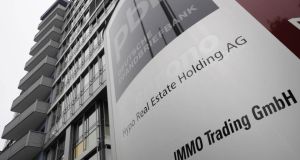 A Munich court is hearing arguments into whether the near-collapse and subsequent nationalisation of HRE was triggered by liquidity problems at Dublin-based Depfa in the wake of the 2008 Lehman Brothers collapse. Photograph: Christof Stache/AFP

A former board member of property lender Hypo Real Estate (HRE) has denied it acquired a “ticking time bomb” through its 2007 takeover of Dublin-based bank Depfa PLC.

A Munich court is hearing arguments into whether the near-collapse and subsequent nationalisation of HRE was triggered by liquidity problems at Depfa in the wake of the 2008 Lehman Brothers collapse.

Some 100 former shareholders have taken a compensation test case in a civil suit against HRE and its new owner, effectively the German state. They are seeking €1.1 billion in damages, claiming HRE executives acted recklessly in the 2007 Depfa takeover and withheld existential problems as they came to light a year later.

Yesterday former HRE board member, Robert Grassinger, involved in due diligence of Depfa, described the acquisition a “very positive step” for the Munich lender as it allowed diversification in activity and thus a greater risk spread beyond its own core property financing business.

HRE wanted to use Depfa’s “outstanding connections” to financial markets to raise greater volumes of capital, and its core activities – public sector and infrastructure financing – were considered by HRE and financial markets as low risk, said Mr Grassinger.

The new owner planned to close down Depfa’s riskier global markets business, he said, comprising about 5 per cent of its business.

Testimony
Ex-chief executive of HRE, Georg Funke, cancelled his expected testimony on Thursday, citing criminal proceedings against him. He may make a later appearance if, as is expected, criminal charges against him are dropped.

“Neither I nor Funke considered Depfa a ticking time bomb,” said Mr Grassinger yesterday in Munich’s higher regional court. “No other board member ever expressed this or gave any indication of this.”

Lawyers for HRE shareholders, forced to hand over for €1.30 the shares they had bought for up to €50, say Depfa showed clear signs of a bank in trouble which, had they performed adequate due diligence, should have triggered alarms at HRE. As examples of Depfa’s problems, Andreas Tilp, leading the shareholder case, cited its breach of Irish liquidity laws and its incorrect recording €50 billion in repurchase agreements. Mr Grassinger said he was not aware of these matters.

“Taking over Depfa was the death sentence for HRE,” said Mr Tilp. “This is about a failure of the whole system . . . not just the board but the German financial regulator, Bafin. ”

Lawyers for HRE dispute claims by shareholder lawyers, saying the bank’s board communicated adequately to shareholders all risks the bank faced.

Shareholders in court yesterday argued that HRE’s new owner is frustrating their attempts to put the pieces together and get justice. An expert report into the affair, commissioned by shareholders before the nationalisation, has yet to be released by HRE’s owner.

A leaked draft of the report calls into question the established narrative of the affair – that Depfa dragged HRE over the cliff – and points to grave problems in the Munich bank’s own structures, in particular its inability to produce up-to-date, accurate financial data.

Many shareholders believe Germany’s other private lenders used the HRE/Depfa crisis as a smokescreen to distract from their own difficulties and sacrificed HRE to convince the federal government to agree a general bank rescue fund.

Many ex-HRE shareholders yesterday said they didn’t believe Depfa was the sole cause of HRE’s existential problems.

The case is likely to continue for the rest of the year.

1 How much state pension will I get next year?
2 Am I crazy to consider switching to an Ulster Bank mortgage?
3 PTSB plays down Ulster Bank talk as it sells €1.4bn of loans
4 Irish tech company Asavie acquired by Nasdaq-listed Akamai
5 How long can Government afford to keep State pension age at 66?
6 Avolon appoints Paul Geaney as chief risk officer
7 Disposable income in Ireland rose 28% between 2012 and 2019
8 Wild Geese: From a Macroom farm to the top level at Intel in Oregon
9 Up or down – how much is your Local Property Tax this year?
10 EU bank watchdog may need to revisit payment breaks
Real news has value SUBSCRIBE