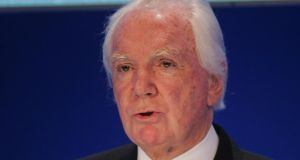 One-time billionaire businessman Sir Anthony O’Reilly has had judgment for €22 million entered against him at the Commercial Court. He has other borrowings of some €195 million, the court heard. Photograph: Alan Betson.

One-time billionaire businessman Sir Anthony O’Reilly has had judgment for €22 million entered against him at the Commercial Court. He has other borrowings of some €195 million, the court heard.

Judgment for some €23 million in total was also entered today against two of the businessman’s investment vehicles and the court was told all three defendants were insolvent.

Sir Anthony did not object to entry of judgment in favour of Allied Irish Banks but his counsel Michael Cush sought a six-month stay on the judgment’s registration and execution to allow completion of a sale of unsecured assets.

Mr Justice Peter Kelly said he wanted time to consider the stay matter and would give his judgment on that issue on Friday. He would grant a stay until Friday pending that decision.

Earlier, when entering judgment, plus interest, against Sir Anthony and the two companies, the judge said Sir Anthony deserved credit for accepting from the outset the monies were repayable.

Sir Anthony hopes the assets sale, including of his 750-acre Castlemartin estate and shares in Independent Newspapers, will discharge most or all of the debt owed to AIB.

Castlemartin is the “jewel in the crown” of assets and the key to his ability to pay off the debt, the court heard.

Sir Anthony had agreed with other creditors, owed some €195 million, they would not move against him so as to facilitate sale of assets with the proceeds of sale to be distributed pro-rata among creditors.

If the stay is not granted, the consequences for Sir Anthony and two of his companies are “potentially enormous” but AIB would not suffer prejudice if a stay was granted subject to certain undertakings from his clients, his counsel said today.

AIB would do better to allow the sale of Castlemartin and other assets proceed in an orderly way, he said. Expressions of interest had been received.

Michael Collins SC, for AIB, said the only reason there was a plan to sell off unencumbered assets was because the bank had taken proceedings in an effort to get the defendants to “face up” to the scale of the problem.

AIB opposed any stay and queried what was the point of it getting a judgment unless it could register and enforce that, counsel said. Expressions of hope the sales would clear the bank’s debt were not a reason for a stay as such expressions had been a characteristic of the relationship between the bank and Sir Anthony over the years, he added.

While Mr Cush alleged AIB had previously agreed to an arrangement for a pro-rata distribution among creditors of a realisation of unencumbered assets, no proceedings had been taken asserting such an agreement exists, counsel added.

He agreed it could take some time to get monies out of companies based in the Bahamas and other places but the bank wanted to be free to take its own course and not hindered by any stay.

Mr Cush said all secured assets have either been realised or are being realised. AIB was wrong to say the assets realisation began only because of the case as sales were underway prior to that, he said. AIB could not sell Castlemartin of its own volition as only part of that was secured to AIB, he added.

His side had a real interest in the orderly realisation of their assets so as to maximise their value.

State-owned AIB had brought the proceedings seeking summary judgment for €22 million against Sir Anthony, Lissadell, Lyfordf Cay, Nassau, Bahamas; and for €18.6 million and €4.1 million against two of his investment vehicles, Indexia Holdings and Brookside Investments Ltd, after expressing dissatisfaction with proposals to clear those debts.

Brookside owns Sir Anthony’s estate in Glandore, Co Cork, while Indexia holds his near 5 per cent stake in Independent News & Media and share of Providence Resources.

Despite lengthy negotiations from 2010, the defendants failed to make any substantial commitment to repay those facilities and Sir Anthony’s representative Bernard Somers had said on May 14th €2 million cash was not available to meet AIB’s demand to make an upfront payment in partial reduction of the debt, the bank claimed.

Mr Cush said today that, because of the forbearance agreement with the other creditors, it was not possible to make that €2 million payment.

The proceedings arise from loans made to Sir Anthony on dates from March 2009 to fund personal investments, repay a director’s loan and refinance an existing loan. The loans were repayable on dates in 2010 and 2012.

Sir Anthony told AIB last month he had disposed of assets valued at more than $150m since 2011 and used all of the proceeds to reduce borrowings. AIB alleged only $307,737 of the US$150m was used to discharge its debt and the $307,737 represented the sale proceeds of a property owned by Sir Anthony which the bank requested be sold.

Sir Anthony has told AIB he would sell his entire Castlemartin estate had put on the market Shorecliffe House mews, cottage and other buildings and adjoining lands and lands; and would agree a programme for disposal of certain shares in Independent News & Media on which AIB’s debt was secured.

His unencumbered assets include a shareholding in Fitzwilton Ltd controlled by Gilhome Ltd and he was to discuss with the other shareholder the issue of a sale of part or all of the company, according to documents put before the court. Other unencumbered assets included a cottage outside Castelmartin; two pensions of €1 million each, of which only one could be cashed; and contents, valued at between €500,000 to €1 million, of houses owned by him.

A church on the Castlemartin estate including a graveyard where his parents and two grandchildren are buried had been excluded for that reason from security given to banks but would be included in the Castlemartin sale, it was stated.