JPMorgan had Madoff concerns in 1998 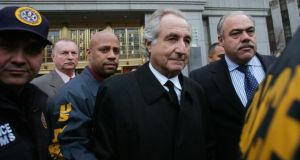 JP Morgan Chase agreed to pay $2.6 billion to head off a criminal prosecution and private litigation over failures to act on its suspicions, some of which came more than a decade before Bernie Madoff’s Ponzi scheme was revealed. Photograph: Hiroko Masuike/Getty Images

JP Morgan Chase bankers had concerns about Bernard Madoff for more than a decade but failed to inform the authorities, according to a damning assessment by the US attorney for Manhattan.

The bank agreed yesterday to pay $2.6 billion to head off a criminal prosecution and private litigation over failures to act on its suspicions, some of which came more than a decade before Madoff’s Ponzi scheme was revealed.

Its $1.7 billion payment to the department of justice is “the largest-ever bank forfeiture”, according to the office of Preet Bharara, US attorney for the southern district of New York. “JP Morgan as an institution failed – and failed miserably,” said Mr Bharara.

It also agreed to pay $350 million to the office of the comptroller of the currency, $325 million to Irving Picard, trustee for the Madoff bankruptcy, and $218 million to plaintiffs in class-action lawsuits. The payments are the latest in a string of huge penalties for the largest US bank by assets, of which about $2 billion will go to victims of the $20 billion Ponzi scheme.

“JP Morgan failed to carry out its legal obligations while Bernard Madoff built his massive house of cards,” said assistant FBI director George Venizelos. “Today, JP Morgan finds itself criminally charged as a consequence. But it took until after the arrest of Madoff, one of the worst crooks this office has ever seen, for JP Morgan to alert authorities to what the world already knew.”

As part of the deferred prosecution deal, which spares the bank from criminal prosecution in exchange for the payment and a promise to reform its practices, JP Morgan admitted it had ignored multiple red flags.It recognised it could have done a better job pulling together information and concerns about Madoff from different parts of the bank over time. It added it did not believe that any employee “knowingly assisted Madoff’s Ponzi scheme”.