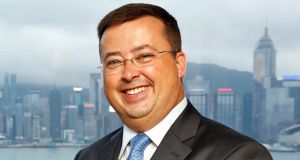 Irish Funds chief executive Pat Lardner: “We’re going to make sure that our voice is heard in the early stages of policy formation and regulation formation.”

The lobby group for the Irish funds industry is to open an office in Brussels to beef up its European Union advocacy ahead of Brexit.

Amid fears of a clampdown on financial services across the EU in the absence of the UK, its chief advocate, Irish Funds, has appointed former BNY Mellon executive Umar Ahmed as its new head of EU affairs.

From next month, Mr Ahmed will lead the industry body’s engagement with the EU institutions, regulatory authorities and other stakeholders.

Irish Funds chief executive Pat Lardner described the move as a “a natural extension” of the group’s domestic advocacy strategy but acknowledged Brexit made it that bit more urgent.

“We needed to do it anyway but the very fact that the British voice will be absent from a number of tables makes it all the more pressing,” he said.

“As an industry that has a big and significant contribution to the Irish economy we’re going to make sure that our voice is heard in the early stages of policy formation and regulation formation,” he said.

The value of Irish-domiciled funds is now in excess of €2.5 trillion, making Ireland a significant player internationally, while industry employs about 16,000 people in the Republic.

“We are a significant player in a European context and a sizeable player in a global context,” he said. “The industry is really strong on the basis that it’s not correlated to domestic demand, and the size of the market that it seeks to address isn’t limited by the size of the domestic consumption market, which makes a good diversifier of economic activity in Ireland,” he said.

According to industry magazine Funds Europe, the City of London is on track to lose 7,000 financial services jobs as a result of Brexit.

Up to £1 trillion of assets are also being transferred to other financial services centres in the EU with Dublin being the preferred location, with 28 companies, saying they are considering or have moved operations and/or staff there. Ireland is followed by Frankfurt (21), Luxembourg (19) and Paris (18).