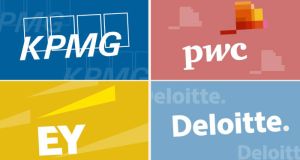 Between them KPMG, PricewaterhouseCoopers, Deloitte and EY control more than 90 per cent of UK audits for large companies.

The “Big Four” accounting firms should be forced to legally separate their “cash cow” consulting work from their auditing businesses, a UK Parliament committee said on Tuesday.

PricewaterhouseCoopers, Deloitte, EY and KPMG – which between them control more than 90 per cent of UK audits for large companies – should make a “full legal separation” of their auditing and consultancy work, according to a 100-page report from the Business, Energy and Industrial Strategy Committee. MPs had dozens of recommendations, including an absolute cap on the market share of the Big Four, and making senior company management liable for mistakes in their financial reports.

“We are not confident in relying solely on the integrity of auditors to do the right thing in the face of conflicting interest,” the report said. “For the big firms, audits seem too often to be the route to milking the cash cow of consultancy business.”

Parliament, while preoccupied with negotiating the country’s exit from the European Union, was jolted into action last year by high-profile corporate collapses such as building contractor Carillion and bakery chain Patisserie Valerie Holdings. Accusations that auditors missed red flags and questions over how the industry is regulated led to plans for the abolishment of the Financial Reporting Council.

It will be replaced with a watchdog that can issue stronger punishments for failure.

The report goes further than the initial recommendations proposed by the UK antitrust regulator, which has the power to force through the changes. The Competition and Markets Authority said in December a split should only take place at an operational level, holding off on calls for a full structural breakup or a cap on an auditor’s market share.

“The benefits of a separation are large, and in our judgment, worth incurring significant costs,” the lawmakers said in the report. A UK business lobby group said the proposals to force a breakup were “heavy handed”.

“The UK’s position as a stable, evidence-based country is already under threat,” said Josh Hardie, the deputy director of the Confederation of British Industry. “So rushing to simplistic measures rather than following a clear, considered long-term approach will damage our reputation further.”

The committee also suggested that the largest British companies should have joint reviews – a proposal that has been strongly resisted by the Big Four. Two auditors should sign off on the accounts, with at least one being from a smaller firm outside the top tier, according to the report. Separately, the FRC said it had started a review of KPMG’s governance, controls and culture within the company’s audit practice. The regulator has been reviewing KPMG over potential failures with the Carillion audit. – Bloomberg