Inquiry into JPMorgan hiring in China 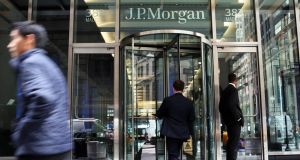 US federal authorities have opened a bribery investigation into whether JPMorgan Chase hired the children of powerful Chinese officials to help the bank win lucrative business in the booming nation, according to a confidential US government document.

In one instance, the bank hired the son of a former Chinese banking regulator who is now the chairman of the China Everbright Group, a state-controlled financial conglomerate, according to the document, which was reviewed by the New York Times, as well as public records. After the chairman’s son came on board, JPMorgan secured multiple coveted assignments from the Chinese conglomerate, records show.

Cash bribes
The Hong Kong office of JPMorgan hired the daughter of a Chinese railway official. That official was later detained on accusations of doling out government contracts in exchange for cash bribes, the government document and public records show.

The former official’s daughter came to JPMorgan at an opportune time for the New York-based bank: the China Railway Group, a state-controlled construction company that builds railways for the Chinese government, was in the process of selecting JPMorgan to advise on its plans to become a public company, a common move in China for businesses affiliated with the government.

The focus of the civil investigation by the US Securities and Exchange Commission’s anti-bribery unit has not been previously reported. JPMorgan – which has had several run-ins lately with regulators, including one over a multibillion-dollar trading loss last year – made an oblique reference to the inquiry in its quarterly filing this month.

The filing stated that the SEC had sought information about JPMorgan’s “employment of certain former employees in Hong Kong and its business relationships with certain clients”.

In May, according to a copy of the confidential government document, the SEC’s anti-bribery unit requested from JPMorgan records about Tang Xiaoning, the son of China Everbright Group chairman Tang Shuangning. The elder Mr Tang was previously vice-chairman of China’s top banking regulator.

The agency also inquired about the hiring of Zhang Xixi, daughter of the railway official.

The document and public records do not definitively link JPMorgan’s hiring practices to its ability to win business, nor do they suggest the employees were unqualified. The records do not indicate the employees helped JPMorgan secure business. The bank has not been accused of any wrongdoing.

Hiring strategy
Yet the SEC’s request outlined in the document hints at a broader hiring strategy at JPMorgan’s Chinese offices. Authorities suspect JPMorgan routinely hired young associates from well-connected families that ultimately offered the bank business. A spokesman for JPMorgan said: “We publicly disclosed this matter in our 10-Q filing last week, and are fully co-operating with regulators.”

The ministry of railways, which has since been restructured, and the China Everbright Group did not respond to requests for comment. – (New York Times service)