Inequality debate plays fast and loose with the maths 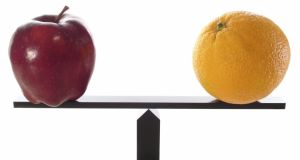 Apples and oranges: the comparison with “US poverty levels” is risible; one economy is at full employment, the other is not even close. Photograph: Thinkstock

The inequality debate is possibly one of the worst instances of statistical abuse since Pythagoras. The most recent outbreak saw commentators – who really do know better – purring over the a Tasc report that was as thick with an agenda as it was cavalier with numbers.

The most egregious abuse came with the acknowledgement, barely made – almost a footnote to be ignored – that, thanks to an aggressive system of income redistribution, Ireland’s rate of inequality is basically bang on Europe’s average.

Yes, before we do the Robin Hood thing – tax the rich, give to the poor – we have worse than average inequality. But we do exactly what the poverty lobby demands of us: we redistribute an awful lot of income, precisely with the aim of reducing inequality. And we are very good at it.

That really should be it: a conclusion that doesn’t pass the “so what?” test. A case of “move along, nothing to see here”. But no, we are left with the conclusion, utterly bogus, that we are in an awful, unprecedented state and something should be done about it. And we all know what that “something” is.

We are told that we only raise about 30 per cent of the economy in terms of taxes. And we immediately run into, yet again, our old friends GDP and GNP, abuse of which is legendary in these kinds of debates.

Details are dull, much preferred are headlines, but digging into those details reveals that the headline writers, at best, got it wrong, and, at worst, pursued a drearily familiar adolescent left wing agenda.

Second, we have much lower social security contributions, especially from employers. Third, there is corporation tax, a familiar story.

A theme running through much of the debate is the idea that, if we only raised taxes to the levels of some other countries, we could achieve French or Scandinavian levels of public service.

None of these dreamers talk about relative levels of public sector pay: how much it costs, relative to Ireland, to provide those elevated levels of public provision. And it isn’t remotely true that if we raised taxes, we could straight away have a French-style railway system. Decades of past public infrastructure investment are a big enabler of current public service provision. It’s not just about the current level of taxes.

Over the past quarter century, global GDP has doubled and global poverty, conventionally measured by the usual agencies, has halved. Nobody mentions this in our parochial domestic debate, nor how globalisation impacts developed country inequality.

The thinly hidden agenda behind the commentary and OpEds is that the 1 per cent should be targeted – presumably with higher taxes.

In Ireland, using those commentators’ definition of the 1 per cent, Revenue data reveal the existence, in 2015, of 24,500 individuals (or couples taxed as a unit) in the crosshairs. It should be easy to extract more from these fortunate souls. There are so few of them we could probably all name a good proportion of them. Or, at least, the firms that they work for: and the majority of those businesses will not be indigenous ones.

Given how much we already extract and redistribute from these 24,500 people, I have no doubt they will be delighted to dig even deeper. It won’t, of course, cross the minds of this small cohort to take their pre-redistribution incomes elsewhere.