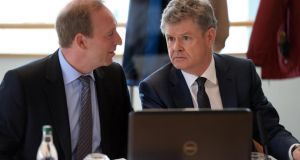 Pensions and financial advice specialist IFG said on Tuesday that both revenues and profits advanced in the first three months of its financial year and it is now targeting “meaningful profitability” for 2015.

The group is now wholly focused on the UK market, following the sale of its Irish pension and advisory business and other smaller advisory and administration businesses in Ireland, France and Asia, last year. However, CEO Paul McNamara moved out a move to the UK in the foreseeable future.

Speaking at the company’s agm in Dublin’s Herbert Park Hotel on Tuesday, Mr McNamara said that both revenues and profits in the first quarter were ahead of the same period in 2014, with continuing emphasis on margin and cost management.

“It’s going to plan,” he said, while chairman John Gallagher noted that trading in 2015 was in line with expectations with new business momentum sustained in its core businesses.

“The group is on track to deliver meaningful growth in profitability in 2015”.

IFG also said that changes in the UK financial advice enviornment are also proving favourable to the company.

Of the UK’s retail distribution review (RDR), which bans commission payments on finanical advice, Mr McNamara said, “on balance it’s good”, while recent legislative tax changes with regards to pensions are “generally good for our business” he said.

With a strong balance sheet following its reorganisation in 2014, IFG said it will consider acquisition opportunities.

While Mr McNamara didn’t rule out an Irish acquisition, he said the group’s focus is now on the UK market, and it is “watchful” of potential opportunities at the higher value end in this region.

“We don’t need to do an acquisition, but if an opportunity comes along that gives us a better position, we will look at it,” he said.

The group continues to “explore options” to divest its interest in its Irish general insurance business, ARB, as it’s now non-core to group strategy, but the business “ continues to perform well and is profitable”.

Shareholders in IFG approved the appointment of Deloitte as the financial services group’s auditor at its agm in Dublin yesterday. The Big 4 firm won a competitive tendering process, which featured both Big 4 and non Big firms.

Speaking after the event, Mr McNamara said it was “good practice” to rotate auditors, and that it opted for a Big 4 firm again as it offered the “level of comfort” it needed. PwC, which has audited IFG since around 1990, was paid total fees of £313,000 in 2014, 41 per cent of which related to the company’s statutory audit. Mr McNamara did not indicate whether or not fees for Deloitte would be lower.

IFG approved a full-year dividend of 4.04 pence at its agm, and Mr McNamara re-affirmed the company’s commitment to a progressive dividend policy, with dividends set to rise in line with the company’s growth.

Given the UK focus of its business, IFG’s dividends are now denominated in sterling, but Mr McNamara ruled out a move of either its primary stock exchange listing, or its headquarters, from Dublin to the UK, at least for the foreseeable future.