Hub accounts for 15% of multinational employment in Ireland 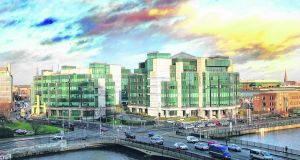 The IFSC accounts for 15 per cent of multinational employment in Ireland, and contributes 7.7 per cent of Irish GDP. Photograph: Bryan O'Brien/The Irish Times

Ireland must make the most of its reputation as the place to develop software and new technologies if the IFSC is to prosper, according to John Moran, secretary general of the Department of Finance.

He told a conference on the future of the IFSC organised by NUI Maynooth’s department of geography that Ireland should develop software for financial services as it would “sit well with the financial services” companies in operation here, improving the infrastructure.

“There is no intrinsic reason why Ireland should be the hub for aircraft leasing in the world. We provided the infrastructure to allow that industry to grow though.”

Accenture senior director Anindya Roy told the conference that Ireland does not have the infrastructure to cater for big data. A lot of countries such as Singapore were investing heavily in the area.

The IFSC accounts for 15 per cent of multinational employment in Ireland, and contributes 7.7 per cent of Irish GDP.

Ireland’s international financial services sector is facing increasing competition from cities such as Budapest and Birmingham, and must improve its infrastructure to remain attractive for business, the IDA’s Kieran Donoghue has said.

Mr Donoghue, who is head of international financial services at the IDA, said Ireland’s ranking on the Global Financial Centre Index, which assesses the competitiveness of financial centres, was slipping.

Dublin tumbled out of the world’s top 50 rated financial centres for the first time this year.

Mr Donoghue said the Libor scandal and the current crisis in Cyprus was not helping the IFSC, and that Ireland must embrace the digital marketplace in terms of technology to help international banks located here.