Drawing from the Celtic Tiger era goes for €3,000 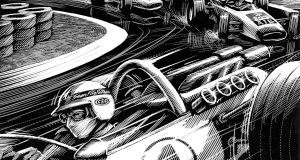 The original artwork for an Irish Times cartoon of Anglo Irish Bank’s Seán FitzPatrick as a Formula One racing driver sold for €3,000 at Sheppard’s Irish Auction House in Durrow, Co Laois on Wednesday. The price was ten times the top estimate – and the hammer fell after a short but intense bidding battle between two unnamed Irish bidders on the telephone.

The black-and-white pen-and-ink drawing entitled “Pole Position” by artist David Rooney had a pre-auction estimate of between €200 and €300. It was an unlikely entry in an eclectic auction and was listed as Lot 1,166 - after a Japanese antique porcelain charger plate and followed by a 19th century Meissen cup and saucer.

The cartoon, which Sheppard’s said “encapsulates the boom years of the Celtic Tiger” was bought by an Irish bidder who wishes to remain anonymous. He had read about the auction in The Irish Times and gone to view it in Durrow. He was struck by “the pure humour” of the cartoon - perhaps because, as he revealed, he had not been “hurt” by the banks.. He admitted that he had “paid more than [HE]intended” but was “very pleased” with his purchase. In addition to the hammer price of €3,000, he will have to pay auction buyer’s fees and VAT totalling approximately €730.

The image was originally published in the business pages of The Irish Times at the height of the Celtic Tiger boom. The artist subsequently sold the original artwork and the unnamed owner had consigned it to Sheppard’s auction. The drawing depicts Mr FitzPatrick in an Anglo Irish Bank-branded racing car - numbered one and bearing a sticker with the legend “pre-tax profits up 33 per cent” – speeding ahead of rival drivers in AIB and Bank of Ireland branded racing cars.

As with any major historical event, memorabilia associated with the Irish banking crisis is likely to become very collectible. The famous signage from above the St Stephen’s Green headquarters of Anglo Irish Bank has already been donated to the Irish Museum of Modern Art but many items - from branded golf balls to share certificates - are expected to turn up at auctions in the future.