Firm with 14,000 Irish customers estimated to have asset shortfall of as much as €21.5m 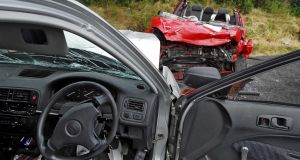 The Central Bank has advised Enterprise Insurance’s Irish customers to contact their broker as soon as possible to arrange alternative cover.

Enterprise Insurance, a Gibraltar-based firm whose collapse last week has hit 14,000 Irish motor customers, has been described in court as “hopelessly insolvent”. It has as an asset shortfall of up to £18 million (€21.5 million) .

The Gibraltar Financial Services Authority (GFSA) said this week that Frederick David John White of Grant Thornton has been appointed as provisional liquidator of the insurance company.

Anthony Dudley, the Chief Justice of the Gibraltar Supreme Court, described an estimated £11 million to £18 million (€13 million to €21.5 million) shortfall between Enterprise’s assets and liabilities as a “a huge deficiency” as he heard the application.

Ireland’s Central Bank has reiterated that affected customers should contact their broker as soon as possible to arrange alternative cover, even as the GFSA continues to say that policies remain in place and that “no action is required at this stage”.

The GFSA said the provisional liquidator would “focus all efforts into dealing with claims and will work alongside the relevant compensation schemes with the view of achieving the best possible outcome for policy holders.”

While Setanta Insurance, the Malta-regulated insurer that imploded two years ago leaving €90 million of outstanding claims, sold insurance only in Ireland, Enterprise also had business in France, Greece, Italy, Norway and the UK.

The liquidator’s appointment comes days after Wexford-based Wrightway Underwriting, an insurance agency that wrote business in Ireland through brokers on Enterprise’s behalf, said it would refund outstanding Irish premiums.

Wrightway had declined to say how much money is involved, other than that it is a “significant” amount that will be met using its own resources.

The fallout from Setanta continues. While it was initially expected that the State-run Insurance Compensation Fund would cover up to 65 per cent of Setanta claims, to a limit of €825,000 per claimant, the High Court and Court of Appeals have pushed the bill onto the Motor Insurers Bureau of Ireland (MIBI), an industry-funded body that deals with claims against uninsured drivers. The bureau has been allowed appeal against this to the Supreme Court.

Meanwhile, a Government-commissioned report recommended on Friday that third-party motor claims arising from the liquidation of an insurer should be met in full by the ICF, with the MIBI contributing 35 per cent.