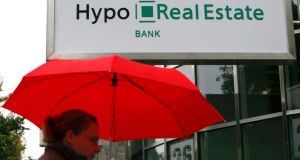 Germany could be left with a €500 million compensation bill after a Munich court ruled that property lender Hypo Real Estate (HRE) falsified accounts and misled investors about its exposure to the financial crisis.

The German lender and its Dublin subsidiary Depfa went into a tailspin after the collapse of Lehmann Brothers in September 2008. The HRE group survived only after a state-led bailout before it was eventually nationalised.

After a 10-month hearing, Munich’s higher regional court ruled yesterday in favour of a group of investors squeezed out in 2009.

In a civil test case, their lawyers claimed HRE manipulated data in 2007 and 2008 to mask the bank’s exposure to risky US investments. This misinformation, they argued, saw them lose their investment during the later squeeze-out of private investors after the nationalisation.

“From our perspective, HRE acted incorrectly and against accounting provisions. We see the whole thing as account manipulation,” judge Guido Kotschy said in his ruling, saying the board’s actions had been to “draw a veil” over the perilous state of the bank’s finances.

The HRE holding group insisted the ruling was “not right” and it expected a reversal on appeal. Lawyers for the former investors in HRE welcomed the ruling as a “complete victory” that strengthened shareholder rights and Germany’s reputation as a place to invest.

“The exact sum will be clear after closer study of the ruling, but we assume a sum considerably over €500 million.”

The court’s test ruling opens the door to hundreds of compensation claims, in particular for investors who bought HRE shares between August 3rd, 2007, and January 15th, 2008. Investors outside this five- month window may be entitled to a percentage of their investment if they take a case.

The ruling comes ahead of next year’s criminal trial of former HRE managers – including former chief executive Georg Funke, who resigned in 2008 and declined to testify in the civil trial.

The role of Depfa in HRE’s undoing will play a larger role in the criminal trial than it did in the civil case, which concentrated on information practices of its HRE parent company in Munich.

The judge ruled that HRE had issued an incorrect press release on August 3rd, 2007 that had played down its CDO exposure and failed to correct this in later communications. He said the bank should have written off its CDOs immediately when the market for such assets collapsed in August 2007.

The bank held CDOs worth about €2.64 billion before the crisis which it eventually sold off for €759 million in October 2009. After first playing down the risks in the HRE group balance sheet, eventual admissions that it faced massive write-downs in January 2008 triggered a 35 per cent slump in the HRE share price and led to the later bailout.

While many, including the federal government, insist Depfa brought down HRE, senior figures with knowledge of HRE’s pre-crisis accounts say the Dublin-based bank was only a catalyst for HRE’s own serious problems.

Yesterday’s ruling also opens the door to compensation for hundreds of private investors, many of whom lost their savings when the state squeezed them out of HRE.