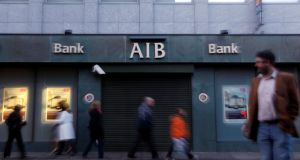 From 2002 to 2009, Donal Forde ran the AIB unit responsible for €17 billion of loans for land and property development in Ireland. Photograph: Cathal McNaughton/Reuters

Donal Forde, the former head of AIB’s operation in Ireland, has conceded that his annual pay in the boom years was “silly” and “inordinate”, but it didn’t appear this way to him in the period leading up to the financial crash in 2008.

“It seems an inordinate amount of money in hindsight,” Mr Forde said under questioning from Socialist Party TD Joe Higgins at the Oireachtas banking inquiry.

Mr Forde said he had rejected two job offers in the period before the crash, one domestic and one abroad. “So I’d no sense that I was as overpaid as I now seem to have been in hindsight.”

The former AIB executive, who left the bank in November 2009 after a 31-year career, was “very conscious of my failure and of the bank’s failure” in its lending decisions but “acted at all times in good faith”.

From 2002 to 2009, Mr Forde ran the unit responsible for €17 billion of loans for land and property development in Ireland.

Under questioning from Fine Gael’s Kieran O’Donnell, he accepted the division he ran was “substantially” responsible for AIB requiring a €20.8 billion bailout from the State between 2009 and 2011.

Earlier, Mr Forde said insufficient stress testing of loans and “inadequate” loan security were key reasons behind the bank’s difficulties in late 2008. His failure to prevent this was a matter of “deep regret” to him.

“With the benefit of hindsight, the first point of failure came with the collapse of economic activity and the manner in which it undermined repayment capacity – sales agreed to in contracts, while legally binding, did not materialise; rental incomes were much reduced and other commercial revenue streams were compromised,” he said.

“The second point of failure was the inadequacy of the 70 per cent loan-to-value constraint on our security,” he said. “In light of the scale of the subsequent fall in property values, this left the bank with insufficient cover.”

Mr Forde said it was now clear to him that these failings “represented poor judgements from an internal bank management perspective”.

On the issue of AIB’s solvency in early 2009, Mr Forde said he reported that losses across the division could be between €2 billion and €3 billion. Credit decisions were “centralised and regimented” but the problem lay “more fundamentally in the credit policy that we had adopted and the level of property-related exposure in our portfolio”.

AIB’s lending decisions were based on the belief, “now obviously mistaken”, that long-established, experienced scale-players in the property market represented a better risk than smaller less experienced counterparties.

1 Majority of employees don’t want to return to pre-Covid working patterns
2 Homeworking is depriving me of juicy gossip
3 Tobacco giant’s menthol-ban substitutes take 5% share of Irish market
4 If tourists are such pariahs should we not be testing them on arrival?
5 Varadkar and Donohoe to meet banks to discuss mortgage breaks
6 Primark rejects £30m bonus for bringing back staff
7 Investors in Irish solar energy fund in line for €20m payout
8 ‘My rent here is so low it’s a joke’
9 Norwegian airline sued in Dublin by inflight caterer
10 Government should set a benchmark for any permanent increases in spending
Real news has value SUBSCRIBE