Finance Ireland to lend over €100m for commercial property deals

Lending doubled in first quarter, with run rate now at €10m a month 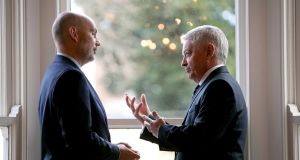 Billy Kane( right) executive chairman of Finance Ireland, and Fergal McAleavey, head of private equity at Ireland Strategic Investment Fund, at the announcement last year the fund was making a €30m investment in the company

The privately-owned company, led by former Permanent TSB chief executive Billy Kane, has revealed that it has financed more than 40 transactions since it entered the market in 2016, involving a combined €65 million in loans.

Ken Murnaghan, Finance Ireland’s managing director of commercial mortgages, told The Irish Times that its current run rate for lending was €10 million a month. “We’ve had a great first quarter of the year, and running at €10 million a month is a nice place to be.”

Mr Murnaghan said the Irish company had focused on lending to domestic borrowers at between €1 million and €5 million per transaction. This has been used to fund deals on income-producing assets with SME-sized tenants. This typically involves a small block of apartments, offices, retail or factories.

“It’s a targeted segment of the market. In this space we see that we’ve done more business than anyone else. We have our own money and our own balance sheet, and we make all of our decisions from this building.”

He said 85 per cent of the lending was used to support projects in urban areas (Greater Dublin, Cork, Galway and Limerick) and the balance in provincial centres.

Some 30 per cent was in both the residential buy-to-let space and retail, 25 per cent in office and other commercial, and 15 per cent in industrial.

Finance Ireland’s typical loan-to-value ratio is 75 per cent, with interest rates ranging from 6.5 to 8.5 per cent. The company is a regulated business, allowing it to lend to individuals as well as companies.

“We are experiencing strong market momentum at the moment,” he said. “We doubled our size in Q1 with regard to both customer and team numbers. International loan funds remain active, and we are an important part of the story on how they exit the market and how borrowers rebuild their businesses with a new lender.”

Finance Ireland was set up in 2002 and employs about 100 staff. Its shareholders include the Ireland Strategic Investment Fund (ISIF) and global investment group Pimco, and it is also involved in auto finance, leasing and agri-finance.

1 In this strangest of recessions, what happens next for Ireland?
2 Overhaul of lease arbitration regime would be a game changer for retailers
3 Should I switch bank now with Ulster Bank at risk of closing?
4 Ireland’s Covid-19 economy in five graphs
5 Ireland is in danger of losing the woods for the trees on emissions reduction
6 Legal tech company Brightflag raises €7m in new funding round
7 ‘Tax war’ will hit Ireland if digital tax talks fail, OECD says
8 South Dublin land at €19m has scope for up to 500 homes
9 David Drumm consents to €7.5m judgment on unpaid loans
10 Boohoo review finds ‘many failings’ in Leicester supply chain
Real news has value SUBSCRIBE