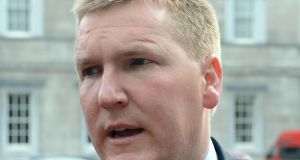 Michael McGrath: he said the Central Bank was still allowing some lenders to “treat their existing customers in a very unfair manner”

The Central Bank’s report into the behaviour and culture of the Irish retail banks is “quite abstract”, and the focus must now be on practical measures to help customers, Fianna Fáil has said.

However, Michael McGrath, the party’s finance spokesman, said he welcomed the recommendation that new legislation may be needed to draw up “accountability frameworks” for the banks, which would make it difficult for senior bankers to shift blame for wrongdoing onto others.

“I have consistently made the point that individuals involved in wrongdoing need to be held accountable,” the Cork South Central TD said. “Fianna Fáil will support the passage of such legislation.”

Mr McGrath said that “culture is also about treating customers fairly”, and said the Central Bank was still allowing some lenders to “treat their existing customers in a very unfair manner”.

“I have repeatedly highlighted examples of this – such as lenders charging existing customers a higher interest rate than new customers. So, a good place for the Central Bank and the banks to start would to prioritise the best interests of customers by treating them all fairly.”

Sinn Féin’s Pearse Doherty said there was little in the Central Bank’s recommendations “which hasn’t already been proposed, or which meaningfully impacts on the legacy of scandals which have mired Irish banks since their crash in 2008”.

The Financial Services Union’s general secretary, Dermot Ryan, said the report should have been “more forthright about the problems that exist”, and that it was disappointing that “the voice of frontline staff hasn’t been given enough weight”.

However, he said the union would work with the Central Bank to make sure that its proposal on the introduction of conduct standards for individuals working in the industry “are proportionate”.

“Any new conduct standards have to support frontline staff, particularly when they have concerns about failings emanating from senior executive level,” he said.

Meanwhile, the Banking & Payments Federation Ireland’s acting chief executive, Maurice Crowley, said: “BPFI and our retail members accept our responsibility in leading the process of further building trust with customers, other stakeholders and the wider public.”

The banking lobby group added that it had advised the Central Bank and Minister for Finance Paschal Donohoe of its support to implement a new framework of accountability for senior bankers.

The country’s banks are currently working on setting up a new independently-led Irish Banking Culture Board, modelled on a similar body in the UK, that will focus on bank behaviour, ethics and culture.

Bank of Ireland said on Tuesday that one of its senior executives, Marion Kelly, has been seconded to lead the next phase of the establishment of the board.