Woman claims she was discriminated against because she was pregnant 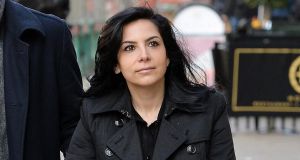 Goldman Sachs banker Sonia Pereiro-Mendez had claimed she was discriminated against after telling her managers she was pregnant. Photograph: PA

A senior banker at Goldman Sachs who claimed she was cheated out of millions of pounds in bonuses and subjected to sexist comments has reached a confidential settlement with the investment bank – just before her employment case was due to start.

Sonia Pereiro-Mendez had claimed she was discriminated against after telling her managers she was pregnant. The London court hearing, which was due to start yesterday morning, was delayed as lawyers held settlement talks.

Ms Pereiro-Mendez, a mother of two, is now understood to have left the bank – where she was an executive director in distressed investing – as part of the settlement.

At a case-management hearing on Friday, it emerged Ms Pereiro-Mendez had secretly taped conversations with some of her managers without their knowledge and extracts would be played during any hearings.

Ms Pereiro-Mendez brought her young baby to court on Friday and the hearing was told she would need occasional breaks to breastfeed.

As well as Goldman Sachs International, Ms Pereiro-Mendez had been suing Nicholas Pappas, a former European head of distressed trading at the bank; Simon Morris, global head of credit trading; and Bryan Mix, global head of loan trading. Goldman and the three men denied the allegations.

Ms Pereiro-Mendez alleged that during the past five years her bonuses and salary had been cut because her bosses felt that “given her pregnancy she was no longer a significant long-term player”.

She claimed she was “publicly mocked” and subjected to “gratuitous and implicitly derogatory references to her childcare arrangements”.

Ms Pereiro-Mendez had worked at the bank since 2003 and climbed the corporate ladder to become a senior banker in its London offices. – Copyright the Financial Times Limited 2015

1 Belgium helps Ireland to a Brexit boon
2 ‘My rent here is so low it’s a joke’
3 This charming man: how Paschal Donohoe won the Eurogroup presidency
4 Can Grafton Street stop the flood of closures?
5 AIB to compensate another 1,100 tracker mortgage holders
6 ‘Sad day’ for House of Ireland as tourism retailer goes out of business
7 New Powerscourt Springs hotel to open in defiance of virus gloom
8 Goodbody’s planned €155m sale to Bank of China falls through
9 Ryanair accuses ‘screen scrapers’ of blocking refunds
10 Bank of Ireland launches €200,000 prize fund
Real news has value SUBSCRIBE