Former media magnate Anthony O’Reilly has been declared bankrupt by a court in the Bahamas and allowed to file for a personal insolvency arrangement. File photograph: Dara Mac Dónaill/The Irish Times

“I don’t think people will be too happy to see his downfall,” says former Waterford Crystal glass-blower Seán Egan on the reaction in the city to news of Tony O’Reilly’s bankruptcy.

The one-time billionaire, along with his brother-in-law Peter Goulandris, pumped well over €400 million into the Waterford Wedgwood group prior to its effective demise in early 2009 without any return, and that loss is widely blamed as forming the start of the journey that led to O’Reilly’s eventual bankruptcy.

O’Reilly was declared bankrupt by a court in the Bahamas and allowed to file for a personal insolvency arrangement.

“Personally I feel sorry for the man,” adds Egan, who spent 35 years at the company which was once one of the country’s largest private employers, with thousands on the payroll at its peak.

“He put a lot of his own money into the company and actually believed in the Waterford Crystal products.”

The frequent injections of cash into the business ultimately failed, with the result that the business went into receivership in 2009 before being bought and, eventually, revived as a much smaller operation - the House of Waterford Crystal - which is enjoying some success today.

“He was just throwing good money after bad,” adds Egan. “He had to call a halt some time… He got nothing out of it. A waste. I don’t think anyone is jumping up and down in Waterford.”

Podcast: Matt Cooper talks to Hugh Linehan about the biography 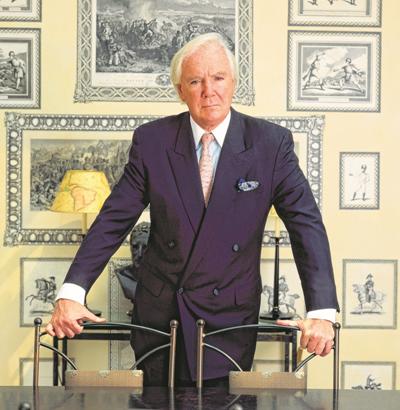 Former colleague at what was known as “The Glass”, Seán Maher, says O’Reilly’s bankruptcy was “sad” on a personal level.

“It’s an awful indictment that, in this day and age, a bank that’s after leaving off an awful lot of people [of debt], who contribute nothing, with massive write-off, and pursue someone like that in the High Court and all over the place… He created a huge brand name and poured a lot of money into it. I’m not going to dance on somebody else’s grave when they’re down.”

O’Reilly was regarded as “a good employer”, in Waterford, said Maher.

“We had security of tenure and, had the government listened to him carefully, Waterford Crystal would be still in business as a larger entity.

“The fact was, the Irish government had been given ample notice of the situation in Waterford Crystal for a long while prior to its demise.”

He added that, had hundreds of former employees not been awarded settlement payments and pension money through a deal with the government, following a legal case brought to Europe, the view of their former boss “wouldn’t be as great”.

That money has only recently started to flow, with pensions still awaited.

Michael Goulding, who worked in the clerical department at Waterford Crystal and spent 23 years with the company, said that while “no one wants to kick a man when he’s down”, people in business make their own decisions.

“Some of them make money as a result of their decisions and some of them lose money… I don’t think Tony will be stuck for a few bob. I think he’ll be okay.

“I think the biggest casualties in this were the workforce - the working class people are the biggest contributors in this and a lot of them went bankrupt.”

Sam Bennett poised to leave Deceuninck-QuickStep at end of season

What should Ulster Bank and KBC mortgage holders do?

1 I'm moving home from abroad but will Irish lenders offer me a mortgage?

2 If I give my holiday home to my daughter what are the tax implications?