Paddy Andrews will work as a wealth manager with the bank 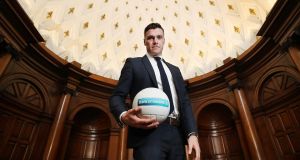 Paddy Andrews, who won the All-Ireland with Dublin in 2013, joins Bank of Ireland from Davy

All-Ireland winning footballer Paddy Andrews has joined Bank of Ireland as a premier wealth manager, offering customers of the bank advice on pensions and investments.

Mr Andrews, who won the All-Ireland with Dublin in 2013, joins BoI from Davy, where he spent several years in a number of roles, including most recently as a broker consultant.

With particular expertise in pensions and investments, Mr Andrews will work in a financial advisory role.

Seán Ó Murchú, managing director, Bank of Ireland Life said: “We are delighted to announce Paddy’s appointment to the role of premier wealth manager at Bank of Ireland. In his new role he will support customers in achieving their financial objectives by delivering expert advice and bespoke financial planning tailored to their individual circumstances.”