Paul Achleitner says state bailout not on cards after $7.2bn mortgage settlement with US 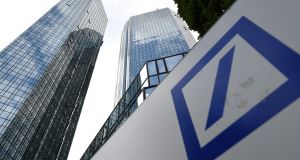 Deutsche Bank chairman Paul Achleitner has ruled out a European merger or a state bailout after the lender’s mortgage settlement with the US department of justice.

The bank, Germany’s biggest, last week announced a $7.2 billion (€6.8 billion) settlement with the US department of justice over its sale and pooling of mortgage securities in the run-up to the 2008 financial crisis.

“The management board in principle looks at everything that could help the business,” Mr Achleitner said in an interview with Frankfurter Allgemeine Sonntagszeitung.

“At the moment, however, enthusiasm for a pan-European merger is muted as we have other priorities,” he said when asked why Deutsche did not merge with Italy’s UniCredit or another lender.

Supervisors including Germany’s Bundesbank and the European Central Bank have called for more consolidation in the banking sector, saying there were still too many banks despite a steady fall in the number of branches since the 2008 financial crisis.

Higher capital requirements would put European banks at a competitive disadvantage to their US rivals, Mr Achleitner said, referring to efforts by the Basel committee of supervisors to tighten bank capital rules to avoid a repeat financial crisis.

“The global rules, established with the Basel accord, must not one-sidedly reflect the views of the Americans,” Mr Achleitner said.