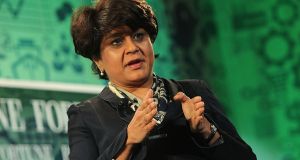 Baroness Shriti Vadera: may be seen as a catch for a bigger bank. Photograph: Paul Morigi/Getty Images

HSBC is apparently getting close to identifying the chairman it wants as a replacement for Douglas Flint, who plans to retire in 2017. Might it become a rarity among big global banks and choose a woman for the role?

Earlier in the year, the bank had let it be known Henri de Castries, the high-flying Frenchman who used to run insurance group Axa, was the favourite. He had been installed on the HSBC board back in March and would have been a neat choice, given the bank’s substantial operation in Paris and the likelihood some HSBC functions will be moved from London to Paris, post-Brexit.

But politics got in the way. Mr de Castries is preparing for a potential role in the French government, after acting as a senior adviser to presidential frontrunner François Fillon. The election is in the spring.

So it was back to the drawing board for HSBC and its senior independent director Rachel Lomax, who is leading the appointment process. There are relatively few internal options other than David Nish, the former Standard Life boss, who has other non-executive roles he would have to forgo.

That may persuade Ms Lomax to prioritise an external search. And if the chatter in City restaurants is any guide, she may settle on another woman.

To date, HSBC, like many big banks, has done a poor job elevating women. It is just about compliant with governance recommendations that a quarter of the board should be women, but is still short of the next target of 33 per cent by 2020.

Among management, the percentages are lower. Only one of the UK arm’s top team of six is a woman. None of the nine top executives is a woman. Doing a better job on diversity is crucial if HSBC is to overhaul its old-school structures and ways of doing business.

The board has recognised this as an issue. As well as elevating Ms Lomax to the SID role last year, the group last month appointed Dame Clara Furse, the former head of the London Stock Exchange, to chair its UK ringfenced bank in Birmingham.

The supply of appropriate women to chair the overall group may actually be readier than that of men. Internally, Heidi Miller is an option. The former senior JPMorgan banker already chairs HSBC’s US arm and is highly regarded.

Externally, City chatter focuses on a few names. Baroness Sarah Hogg is a veteran of the City and of government, and is a non-executive director of the Financial Conduct Authority and the John Lewis Partnership. Elizabeth Corley, former boss of Allianz Global Investors, sits on the board of BAE, Pearson and the Financial Reporting Council.

Perhaps the most credible is Baroness Shriti Vadera, the former government minister who chairs Santander UK. When the Spanish bank planned to list its British subsidiary, it made sense to have a big gun. Now those plans have been ditched, Baroness Vadera, who also leads the City’s chairmen’s group on Brexit, may be seen as a catch for a bigger bank. It would be a blow for her boss Ana Botín. – Copyright The Financial Times Limited 2016