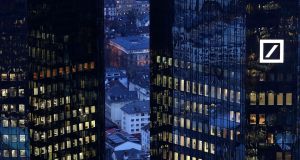 Deutsche Bank’s top ranks are bracing for a potential government-brokered merger with rival Commerzbank by mid-year as they run out of time to turn Germany’s largest bank around.

Executives, preparing to announce results for a difficult fourth quarter on Friday, are concerned such a deal may become their only option if there’s no clear improvement in the first three months of 2019, people briefed on their thinking say. The bank has already warned that the final months of last year were impacted by the dramatic images of a police raid in November, which compounded a challenging market environment.

Chief executive Christian Sewing has pleaded for patience with his current plan, which is centred on cost cuts and efforts to stabilise market share. Yet years of unsuccessful restructurings have left the lender with a slump in revenue it has been unable to reverse. That has fanned speculation it will ultimately be forced to merge with Commerzbank in a bid to add scale and slash expenses in a notoriously competitive domestic market.

Although the bank’s largest investors continue to support Mr Sewing, they’re unhappy with the losses they’ve sustained, according to people familiar with the matter. The stock lost more than half of its value last year, before recovering some of those declines this year.

The German government thinks it will be impossible for Mr Sewing to turn around the bank before a potential economic slowdown exacerbates the situation, people familiar with the government’s thinking said. Berlin on Wednesday slashed its economic growth forecast for this year to just 1 per cent, which would be the weakest pace in six years.

The country still owns a large stake in Commerzbank after a bailout. It doesn’t own a stake in Deutsche Bank, but finance minister Olaf Scholz has said repeatedly that he wants strong international banks to support Germany’s export-oriented companies.

Mr Sewing has ruled out any mergers before 2020, but he’s also said in private that he will have to change his strategy before that if his plan fails. Many officials at Deutsche Bank and the German government favour a merger with Commerzbank as the best option available to Mr Sewing, people familiar with the matter have said.