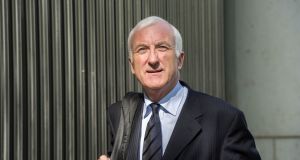 Denis Casey, former group chief executive of Irish Life and Permanent (ILP), has been found guilty in the trial of four former bankers accused of conspiring to mislead investors and the public in relation to the financial health of Anglo Irish Bank in 2008.

Casey (56) and the three other former banking executives had pleaded not guilty to €7.2 billion conspiracy to defraud and mislead investors, depositors and lenders about the true health of Anglo in 2008.

On the afternoon of day 89 of the trial, the jury at Dublin Circuit Criminal Court returned a verdict of guilty for Casey. Judge Martin Nolan finished his charge to the jury on Tuesday, May 11th last.

The verdict came following over 61 hours deliberating over the course of 14 days and brings to an end the longest running criminal trial in the State’s history.

Last Wednesday the jury convicted Bowe (52) and McAteer (65) of conspiring to mislead the public about the true state of Anglo’s balance sheet.

They have been remanded on bail pending sentence until July 25th next. On Friday the jury returned a not guilty verdict for Peter Fitzpatrick (63) following nearly 47 hours deliberating. Mr Fitzpatrick held his head in his hands and wept after the verdict was read out before hugging his barrister, Brendan Grehan SC.

The prosecution case was that the four men were involved in a setting up a circular scheme of billion euro transactions where Anglo lent money to ILP and ILP sent the money back, via their assurance firm Irish Life Assurance, to Anglo.

The €7.2 billion deposit was later accounted for in Anglo’s preliminary results on December 3rd 2008 as part of Anglo’s customer deposits figure. The prosecution alleged that the only objective of the scheme was to mislead anybody reading Anglo’s accounts by artificially inflating the customer deposits number from €44 billion to €51 billion, a difference of 16 per cent.

Lawyers for Bowe and McAteer had argued that their clients believed that the deposits were real deposits and were accounted for correctly on Anglo’s balance sheet and so no fraud was carried out.

Lawyers defending Mr Casey and his then finance director argued that their clients had no control over how Anglo would account for the deposits and never had any intention to mislead the public.

1 NI house builder apologises to Harry and Meghan over adverts
2 Opioid executive admits to ‘no morals’ ahead of prison term
3 Who are Ireland’s 17 billionaires?
4 Volvo warns of scaled back car line-up if UK splits from EU rules
5 Are there annual limits on inheritances or gifts to a child?
6 CPL founders Anne Heraty and Paul Carroll in line for €1m dividend payout
7 US threatens retaliation against EU over proposed carbon tax
8 South Dublin Credit Union members urged to borrow more to ensure survival
9 Little strategic thinking in election manifestos of Fine Gael and Fianna Fáil
10 My father in a nursing home wants to gift me his house
Real news has value SUBSCRIBE