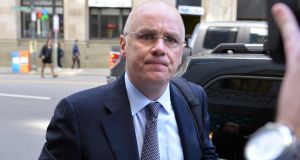 Mr Drumm is awaiting extradition back to Ireland to face 33 criminal charges, which he intends to contest, relating to transactions carried out at Anglo Irish in 2008 while he ran the bank.

A US court has granted former Anglo Irish Bank chief executive David Drumm an eight-week extension to outline the grounds for his second bankruptcy appeal that he requested due to “extreme constraints” of his incarceration while he awaits extradition to Ireland.

The 49-year-old sought the delay in filing the opening appeal brief to the First Circuit Court of Appeals because he has dropped his legal team and is representing himself, and because is “severely limited” in his ability to review his case as he is being held in a prison near Boston.

Mr Drumm is awaiting extradition back to Ireland to face 33 criminal charges, which he intends to contest, relating to transactions carried out at Anglo Irish in 2008 while he ran the bank.

The Dubliner is seeking, for the second time, to overturn the January 2015 ruling of a Massachusetts bankruptcy judge denying him a discharge from bankruptcy and a fresh financial start, free of debt.

A second judge in Massachusetts upheld the ruling of US Bankruptcy Judge Frank Bailey. Mr Drumm was in the process of appealing that ruling when he decided to waive his right to fight his extradition back to Ireland to face the charges back in Dublin.

Chief Appellate Judge Jeffrey Howard granted the former banker his request for the extension and set April 26th as a new deadline to file his opening brief setting out why he believes Judge Bailey erred.

“We are disinclined to allow any further extension,” the court said.

Mr Drumm’s attorneys Edward McNally and David Rosner have applied to withdraw as his counsel in the case. The Dubliner told the court earlier this week that he intends to represent himself.

The former banker has said that the “extreme constraints” of his incarceration includes “a lengthy period of administration segregation due to factors for which the Government acknowledges Mr Drumm has no responsibility.”

He has been detained since his arrest at home outside Boston by US Marshals on October 10th, mostly at the maximum-security Plymouth County Correctional Facility, an hour south of the city.

Judge Bailey found that Mr Drumm knowingly and fraudulently concealed from creditors the transfers of hundreds of thousands of euro in cash and other assets to his wife dating back to 2008 when Anglo was edging towards collapse.

The judge said that Mr Drumm was “not remotely credible” and that his statements to the court were “replete with knowingly false statements, failures to disclose, efforts to misdirect and outright lies.”

The former bank chief executive had blamed his bankruptcy lawyers for his failure to outline the cash and asset transfers to his wife.