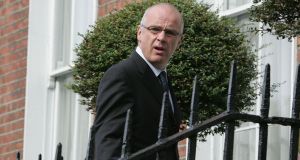 Each offence carries maximum sentences ranging from five years’ imprisonment up to an unlimited term of imprisonment, according to legal records submitted to the US District Court in Massachusetts.

Details of the charges against Mr Drumm emerged after the legal case against him was unsealed and made public by the American court.

Mr Drumm will appear in the US District Court at the Moakley courthouse in Boston at 2.30pm (7.30pm Irish time) before Magistrate Judge Donald Cabell.

A 12-page legal complaint filed in court ahead of an extradition hearing in Boston today says Mr Drumm (48) is charged with offences relating to the scheme to lend money to 10 Anglo customers in 2008 to buy Anglo shares in the unwinding of Sean Quinn’s investment in the bank and the 2008 back-to-back deposits with Irish Life & Permanent.

The court filings disclose that an arrest warrant was issued for Mr Drumm by the District Court in Dublin on June 27th, 2013 on each of the 33 charges being made against him.

He is also charged with failing to disclose the “contracts for difference” investment held by Mr Quinn, the Fermanagh businessman, in Anglo under an EU transparency directive.

He is charged with forgery under the Irish Criminal Justice (Theft and Fraud) Offences Act 2001 and being privy to the falsification of a document as an officer of a company, a company law offence, in relation to letters sent to the 10 businessmen in the Maple 10 scheme.

The former banker is also alleged to have committed a number of offences in relation to the back-to-back deposits between Anglo and Irish Life & Permanent in 2008 that made the bank’s financial position look healthier than it actually was.

For these transactions Mr Drumm is also charged with conspiracy to defraud and false accounting with the intention of making a gain or causing loss to another by making use of an account that is false, misleading or deceptive.

The court filings say that Ireland is seeking Mr Drumm’s extradition from the US under a 1983 treaty between the countries and a 2003 extradition agreement between the US and the European Union.

The former banker was arrested by US Marshals on Saturday in Massachusetts, where he has lived since 2009, on an extradition request from the Irish authorities.

He has been held in custody since then pending an extradition hearing in a federal court in Boston today.

He will appear at the John Joseph Moakley US Courthouse on South Boston’s waterfront later today.