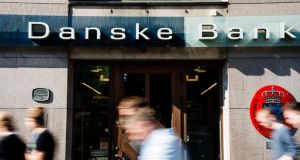 Since taking over as chief executive officer a year ago, Thomas Borgen has sought to turn Danske into a leaner organization with less debt and fewer costs. The strategy earned the bank a one-step ratings upgrade at Standard and Poor’s in April to A, helping reduce funding costs.

“The results are encouraging, but we still have some way to go before reaching our long-term targets,” Borgen said in the statement. “We will continue to execute our strategy and focus on becoming a truly customer-driven, simple and efficient bank.”

Earlier this month, Denmark’s Financial Supervisory Authority said Danske will need to write down its common equity Tier 1 capital by 2.2 billion kroner before tax after conducting an asset quality review of the nation’s four biggest banks.