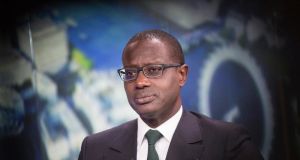 Credit Suisse’s new chief executive told staff in a memo on Wednesday the Swiss bank needed a strong balance sheet to help it through rough times and the discipline to decide where it wanted to invest.

Tidjane Thiam (52), started work as chief executive of Credit Suisse on Wednesday, and investors are optimistic he can bring about a major change of strategy at the bank - though many also expect him to tap the market for cash.

“We will need a strong balance sheet that allows us to withstand adversity, while continuing to invest in the future,” Mr Thiam says in the memo, which was seen by Reuters.

A spokesman confirmed the contents of the memo.

Mr Thiam said Zurich-based Credit Suisse needed to have a strong capital base and be able to generate its own capital in order to gain the trust of the market, regulators and customers.

Choosing what the bank will do and where it invests its capital will be a focus in the weeks and months ahead, Mr Thiam said, adding he would determine the strategy later this year.

It is also the first day for Deutsche Bank’s new chief executive John Cryan, who told the German bank’s staff in a memo that a strategic overhaul would be delayed by three months, and to expect tough reforms as he shakes up a group that he said had become too diversified and complex.