Central Bank urged to row back on proposed mortgage rules 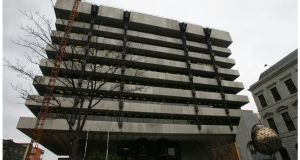 The Central Bank in Dublin. It wants to introduce its new rules on January 1st

Ulster Bank has told the Central Bank that borrowers should be required to have a deposit of just 10 per cent if looking for a mortgage of up to €500,000, in a submission to the regulator about proposed new limits on lending.

Bank of Ireland, meanwhile, has urged the regulator to retain the current informal regime where customers can borrow up to 90 per cent of the purchase price of their property unless evidence emerges that prices are running ahead of the long-term average.

The Irish Mortgage Holders Organisation (IMHO) has argued that first-time buyers should be excluded from the new rules.

The deadline for submissions closed yesterday, with all of the main banks here, the Department of Finance, industry and lobby groups, and political parties giving their views to the regulator on this issue.

The Central Bank has proposed that consumers be allowed to borrow up to 80 per cent of the value of a property only, with the exception of 15 per cent of cases.

In the case of buy-to-let properties, the loan-to-value (LTV) ratio for a loan has been set at 70 per cent, with the exception of 10 per cent of cases. A limit of three-and-a-half times income must also be applied by lenders for private dwelling homes, except in 20 per cent of cases.

It is understood that Ulster Bank and Bank of Ireland are both broadly happy with the loan-to-income ratios. Ulster Bank says setting the deposit level at 10 per cent for home loans up to €500,000 would remove the need for the regulator to allow the banks discretion in relation to 15 per cent of cases.

Bank of Ireland is believed to have indicated to the Central Bank that it does not have a difficulty with the LTV that is proposed for buy-to-let properties but has registered its concerns about the proposed introduction of a mortgage indemnity guarantee.

In a letter to the Central Bank, co-signed by IMHO chief executive David Hall and project manager Stephen Curtis, the IMHO said the regulations should be amended to take account of first-time buyers.

“The requirement of a 20 per cent deposit is prohibitive to allowing first-time buyers access to the housing market and it would be more appropriate for this category of buyer to be exempted from the regulations or subject to a deposit requirement of 10 per cent,” the letter says.

The IMHO said many first-time buyers could be forced to use “alternative, potentially non-regulated sources of finance” to generate the required deposit if the Central Bank pushes ahead with its new rules.

It said potential first-time buyers could end up having to remain in a “currently dysfunctional un-reformed rental market where long-term stable leases are not typically available”.

The Green Party said it favours the Central Bank’s proposed changes but cautioned that it must be part of a package of reforms to the housing and rental market.

The Central Bank wants to introduce its new rules on January 1st.