Irish Nationwide, whose collapse cost €5.4bn, expected to be first up 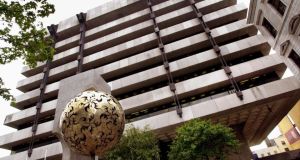 The inquiry has the power to fine regulated corporations up to €10 million or 10 per cent of turnover depending on certain factors. Individuals can be fined up to €1 million provided this will not bankrupt them.

The Central Bank of Ireland will reveal today the names of a high-powered inquiry panel to investigate allegedly rogue banks and bankers.

The first case expected to be reviewed by the inquiry will be Irish Nationwide, whose collapse cost taxpayers €5.4 billion.

It will examine not just unorthodox lending practices but also consider the activities of its former managing director Michael Fingleton who was awarded a €1 million bonus by his board in his final year in charge.

The 13 members of the panel will be made up of retired judges, experienced banking and insurance regulators both current and previous as well as international experts.

It is understood to include at least one former chairman of a State inquiry, senior lawyers who have worked on State tribunals, former senior regulators and lawyers from outside the State.

A number of senior internal Central Bank figures both current and previous are also expected to be announced tomorrow.

Fiona Muldoon, the former Central Bank director of credit institutions and insurance who left in May, is one of the members of the inquiry panel.

The panel will also include figures from industry including bankers and lawyers to financial institutions who are either retired or do not have interests in the State.

The inquiry has the power to fine regulated corporations up to €10 million or 10 per cent of turnover depending on certain factors. Individuals can be fined up to €1 million provided this will not bankrupt them.

The Central Bank has been examining what happened in Irish Nationwide since 2010. it has never publicly commented on its investigations but it is believed to be close to concluding its examinations and moving to becoming a full inquiry.

In January The Irish Times reported that the Central Bank had decided not to take any action against two of its former non-executive directors during the boom.

It is, however, continuing to examine the actions of Fingleton, the society’s managing director for many decades, Michael Walsh, its chairman from 2001 until 2009, and Stan Purcell, its finance director.

An inquiry will consider when making any decision whether any action was “deliberate, dishonest or reckless,” as well as the length of time that contraventions took place and amount of money involved. It is a criminal offence not to answer its questions honestly. It may be held in public or private. A decision of the inquiry can be appealed to the Irish Financial Services Appeals Tribunal.

After that individuals or entities can also appeal to the High Court and if necessary the Supreme Court.