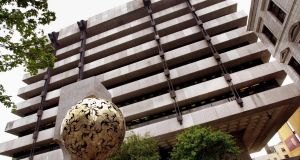 The Central Bank has made three senior directors appointments, which include the return of Mary O’Dea to the regulator from her post with the World Bank.

Ms O’Dea has been appointed as director of securities and markets supervision, with effect from September 2017.

She is Ireland’s representative at the World Bank and has held the position of senior adviser focusing on Europe and Central Asia development issues since 2014.

Before the World Bank, Ms O’Dea held the role of alternate executive director of the International Monetary Fund from 2011.

She also previously held a number of director roles in the Central Bank, including director of financial operations, consumer director, and acting chief executive of the Financial Regulator.

Gráinne McEvoy, head of securities and markets supervision, will fill the post from January 1st until Ms O’Dea takes up her role.

Separately, Michael Hodson has been appointed as director of asset management supervision, with effect from January 1st.

He has worked with the Central Bank since 2011 and has held a number of head of division roles within the markets directorate.

New job to be advertised

Mr Hodson is currently head of investment firms and funds services division, having previously been a founding shareholder of stockbroker Merrion Capital.

Commenting on the appointments, Central Bank governor Philip Lane said: “Together these directors bring a wealth of national and international experience in regulation and central banking to these portfolios and we look forward to working with them deliver our mandate in markets supervision and financial stability.”

Mr Lane also indicated that the interim director of corporate affairs and resolution, John Coyle, would not be seeking a long-term appointment with the bank.

Pending the recruitment of a director of corporate affairs, Mr Coyle will remain in this role to enable an “orderly transition” and would continue to manage his current portfolio of resolution and corporate affairs into the first half of 2017.

The position of director of financial operations is to be advertised in “due course”.