Business had been expected to fetch several hundred million euros 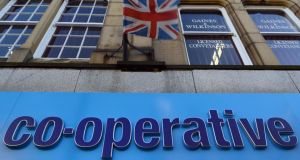 A logo sits on a sign outside a Co-Operative Bank Plc bank branch as a British union flag flies above in Keighley, UK. Photograph: Nigel Roddis/Bloomberg

Britain’s Co-operative Group has scrapped the sale of its general insurance business following a restructuring deal which means it does not have to contribute as much capital to its struggling bank as initially envisaged.

The business had been expected to fetch several hundred million pounds and was due to have been sold during this year. Co-op Group, whose bank has been hit by a capital shortfall and a drugs scandal involving its ex-chairman, said today it had decided to keep the general insurance business because the group now had to contribute less capital to the bank under a revised restructuring plan agreed in November.

Co-op, which is owned by its members and has operations spanning banking, supermarkets and funeral services, was last year rocked after a £1.5 billion (€1.8 billion) capital shortfall was identified at its bank and Paul Flowers, former chairman of the bank, was arrested as part of an investigation into the supply of illegal drugs.

A restructuring of the bank will leave hedge funds in control of that business and Co-op Group with a 30 per cent stake. The group said it can meet its reduced capital commitment to the bank through the already completed sale of its life and savings business and “the strategic management” of some property assets. Euan Sutherland, chief executive of Co-op Group, said he had received “a significant amount of interest” in the insurance business, which provides home, motor and other insurance products. UK insurer Legal & General considered a bid, a person familiar with the matter previously said.

Other potential suitors included private equity firms Anacap and Advent International, and Catalina Holdings, a consolidator of general insurance firms, according to media reports. “Having considered the sale process, and in light of the changed requirements on us under the Bank recapitalisation process, we believe it is in the best interests of our members, customers and colleagues, that we retain this strong business and develop it further,” Mr Sutherland said in a statement. The Co-op announced its plan to sell the business last March.

1 Bank leaked my loan request to family who tried to rip me off
2 Flight attendent seeks High Court injunction against Aer Lingus
3 Wealthy investors’ legal challenge against Revenue fails
4 Coronavirus: ‘All bets are off’, says aircraft industry chief
5 Tax burden on Irish households among lowest in EU
6 Solar panels: Are they worth the investment?
7 UCD campus first stop for drone takeaway food delivery
8 Ten of the most mysterious aircraft disappearances
9 How to . . . cut down on your mobile data usage
10 Beau Lotto: How to rewire our brains to spark innovation
Real news has value SUBSCRIBE