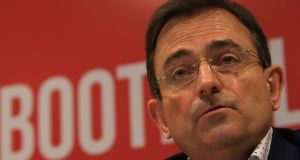 An investor who in 2014 lent $750,000 to troubled property fund Brendan Investments to shore up its finances is demanding his money back, forcing the €13 million fund into a fire sale of its remaining assets.

BI managing director Vincent Regan last week wrote to shareholders to say the ensuing liquidation of its remaining assets in Detroit, where it lost significant amounts of its investors’ money buying abandoned homes, means there will be “very little or nothing to distribute” to shareholders when the 10-year fund matures this year.

Mr Regan blamed extensive coverage of BI’s activities in The Irish Times for the decision of the investor to demand his cash back.

The four-page letter to shareholders of BI, which was cofounded in 2007 by celebrity adviser Eddie Hobbs, was sent on March 6th. It is the first communication to investors by Mr Regan since an October annual general meeting, at which he shocked shareholders by predicting a 90 per cent loss.

Since the AGM, he writes in the letter, the liquidation of its portfolio in Detroit, where it bought hundreds of houses in 2012-2014, is “slower than expected” . He said values are under pressure.

He also reiterated previous statements that a lead water crisis in nearby Flint, Michigan, had caused Detroit authorities to enforce new rules over lead paint, leading to extra annual costs of up to $4,500 per rental house.

The letter says a $750,000 loan with an unnamed individual was negotiated in June 2014, when BI was entering a cash crisis. The fund was unable to repay the loan last summer, so it was extended to December 2016.

“We had an understanding with the creditor that they might consider continuing with the loan,” Mr Regan wrote last week. “However, arising from all of the newspaper articles the creditor sent us a foreclosure notice last week so we must start selling off at whatever values we can get to satisfy the debt, but this will have a serious impact on values.”

Minutes from a 2014 BI board meeting that have been obtained by The Irish Times show discussion of further details of the loan at the time it was made to company.

The minutes, taken by then then BI chairman, senior counsel Dermot Flanagan, said the lender “has been involved on a number of different property deals with Vincent Regan . . . He is known to Vincent who believes him to be a good person to work with.”

The minutes said there was security “of $1.5 million in relation to the agreement”. It said the unnamed investor “has invested approximately $500,000 in Detroit and is getting his cash back and is prepared to reinvest. He is semi-retired and has property in Ireland and elsewhere”.

The letter from Mr Regan highlights that Mr Hobbs and Mr Flanagan departed in 2014, when it was predicted that the then-faltering fund could return to more than 70 per cent of its original value by 2017.

He says there was “no risk of collapse” until last year, and says BI has been “burning up cash” on the holding costs of its properties. It also says the mortgage market had a negative impact, but it was “impossible to say what the reasons are as we are not bankers”.

The letter ends with an apology to shareholders from Mr Regan on behalf of the fund’s management.

“We wholeheartedly apologise for the way this investment has turned out,” said Mr Regan, who is now based in Tunisia, where he runs a call centre. “We have worked long hours and spent many weeks and months in the US trying to turn this investment around.”