Third-quarter revenue at Bank of America down 2.4%, but beats estimates 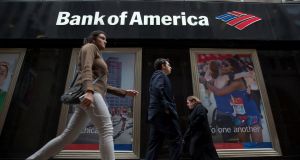 Pedestrians walk past a Bank of America branch in Chicago

Bank of America reported a profit for the third quarter as chief executive Brian Moynihan’s cost-cutting efforts helped the bank offset the impact of weak revenue in three of its four main businesses.

BofA has been slashing billions of dollars in costs in its commercial lending, investment banking and wealth management businesses as overnight fund rates remain near zero and worries about China’s economy and uncertainty over the timing of a rate hike keep traders from making big bets.

The bank’s non-interest expenses fell by a third to $13.81 billion, mainly due to an 83 per cent drop in costs in its legacy assets and servicing unit, which houses many of the bad loans inherited from Countrywide Financial.

Consumer banking was BofA’s only business to report a rise in revenue.

“The key drivers of our business - deposit taking and lending to both our consumer and corporate clients - moved in the right direction ...” Mr Moynihan, who won the backing of shareholders last month after they voted to keep him in the chairman’s role, said in a statement on Wednesday.

The Second biggest US bank by assets is seen as the most sensitive to interest rate movements among the big financial institutions.

Wells Fargo, the biggest US residential mortgage lender, reported a rise in profit for the first time in three quarters on Wednesday, helped by its purchase of commercial loans from General Electric.

BofA’s total revenue fell 2.4 per cent to $20.91 billion on a fully taxable equivalent basis in the quarter ended September 30th, but beat the average analyst estimate of $20.77 billion, according to Thomson Reuters I/B/E/S.

“We view third-quarter results as solid given the tough backdrop,” Goldman Sachs analysts wrote in a note.

Net interest income declined 6.7 per cent to $9.74 billion on a fully taxable equivalent basis, while bond trading revenue fell 10.9 per cent to $2 billion.

JPMorgan Chase also reported a fall in quarterly bond trading revenue on Tuesday and warned that market expectations for the current quarter appeared to be too high in light of slow market trading.

BofA said its headcount fell 6 per cent from a year earlier.

BofA, which has paid more than $70 billion in legal expenses since 2008, said its legal costs fell for the third straight quarter, dropping to $231 million from $6 billion a year earlier.

Provision for credit losses increased 26.7 per cent to $806 million.

BofA reported net income of $4.07 billion, or 37 cents per share, attributable to shareholders.

Analysts on average had expected earnings of 33 cents per share.

In the year-earlier period, the bank had a loss of $470 million, or 4 cents per share, as it took a $5.6 billion charge related to the mortgage settlement.