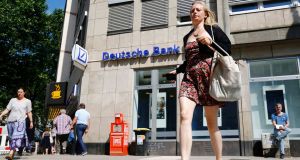 A woman walking in front of a branch of Germany’s Deutsche Bank in Cologne. Photograph: Reuters/Wolfgang Rattay

Berlin’s smartphone bank N26 has been granted a European banking licence, giving it a lead in a looming shake-up of financial services across Europe.

The new arrival on Germany’s banking scene comes as financial giant Deutsche Bank struggles to map out its future, and plans to split its investment and retail operations.

While that banking Goliath stumbles, the market David has attracted 200,000 customers with its virtual banking model.

The Berlin start-up, previously known as Number 26, lacked a licence which meant it was dependent on third-party companies to offer banking services.

Already operating in six European countries, its full banking license permits it to expand further with savings, investment and credit products, as well as innovations N26 founders are confident will leave bricks-and-mortar banks – and their online offerings – in their dust.

“And we’re launching an investment product within the next few weeks, with savings, credit and insurance products within the next six to 12 months. Some will be our own products, most will be partnerships.”

As a new bank emerged on Thursday in Berlin, Frankfurt giant Deutsche Bank was grappling with fresh reports of the latest chapter in its identity crisis.

According to Manager Magazin, Germany’s largest bank is considering splitting itself into a lender focused on capital markets and another targeting retail and corporate clients.

Deutsche confirmed discussions but denied that this strategy, dubbed “Project Jade”, would be a full split, instead describing it as a an attempt to simplify its corporate structure.

Six years after buying it, Deutsche is anxious to get rid of Postbank but has apparently shelved plans.

In May, Deutsche Bank chief executive John Cryan acknowledged that floating Postbank was a challenge in the current market environment.

“We are either hoping for market recovery or are looking for a slightly more creative way to exit our position [in Postbank],” he said in May.

The bank has already scrapped plans to hive off, in one entity, Postbank and its own Deutsche retails branches for fears that a focus on investment banking would raise the bank’s risk profile with ratings agencies.

1 Are there annual limits on inheritances or gifts to a child?
2 Opioid executive admits to ‘no morals’ ahead of prison term
3 Who are Ireland’s 17 billionaires?
4 My father in a nursing home wants to gift me his house
5 Farmer seeks to challenge €3.6bn Intel plan in High Court
6 South Dublin Credit Union members urged to borrow more to ensure survival
7 Budget 2020: New emissions tax on new cars and used imports
8 Fallon & Byrne founders McHugh and Byrne exit group
9 From chips to €14bn in trade: Ireland and Italy’s enduring exchange
10 Help, I’ve no PRSI stamps – can I still get a pension?
Real news has value SUBSCRIBE