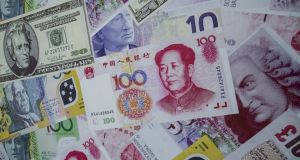 Barclays is set to pay a substantial fine to resolve allegations that it abused foreign exchange markets. Photograph: Reuters

British bank Barclays is set to pay a substantial fine to resolve allegations that it abused foreign exchange markets through its electronic trading platform by next month, presenting an early test for the bank’s incoming chief Jes Staley.

The US department of financial services is likely to impose a penalty of at least $100 million for the alleged electronic trading abuses. This follows the $485 million that the bank agreed to pay New York’s banking regulator in May over manipulation of forex spot trading.

Rating agency Moody’s calculated this week that bank litigation costs since the 2008 financial crisis have reached almost $219 billion, with the bulk of the burden shouldered by US banks, led by Bank of America with provisions of about $70 billion.

The pain was now shifting to their European counterparts, Moody’s said.

The latest fine facing Barclays is smaller than May’s because there is a reportedly lower volume of trades at issue. – Copyright The Financial Times Limited 2015

1 Should my mam wait for house prices to drop before buying?
2 Two prominent business leaders in planning row with neighbour
3 Cheers: Conor McGregor's whiskey races up the sales chart
4 ‘I’m so lucky to be in the Caribbean – a million miles from Derry Girls’
5 Battle for control of America’s mammoth utility industry set to intensify
6 ‘The recovery needs to be a full-scale economic renewal’
7 ‘I have a talent for justifying purchases’
8 Joint accounts: if one of us dies, can the other access the money?
9 Military-style planning can help businesses battle Covid-19 survival threat
10 Coronavirus: Big majority ‘uncomfortable’ returning to everyday activities
Real news has value SUBSCRIBE