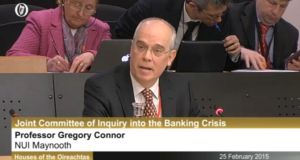 Prof Gregory Connor of the Department of Economics, Finance and Accounting at NUI Maynooth speaking before the Oireachtas banking inquiry, February 25th, 2015 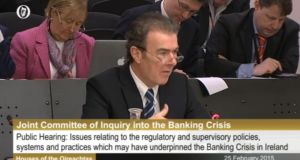 Accountancy standards have not changed since 2008 and the same conclusions would be arrived at if they were used to examine Anglo Irish Bank today, the Oireachtas banking inquiry heard.

UCD accounting professor Eamonn Walsh told the inquiry changes to the standards were yet to come about.

Sinn Féin TD Pearse Doherty said Anglo showed it was on course for a profit of almost half a billion euro in September 2008. He asked Prof Walsh if current accountancy practices were applied, would the same result be reached today.

“There are changes coming down the road,” Prof Walsh said. “There has been no change in standards [since the financial crisis] so one would reach the same conclusion today.”

However, he said he remained unconvinced about what effects change in accountancy procedures might have, despite the debate.

There have been suggestions firms should rotate auditors or engage multiple firms to carry out such tasks, but he said he was not so sure.

“People feel good because they push through reform but does it really change anything dramatically? I have yet to see evidence of that,” he said.

The inquiry heard that between 2002 and 2007 the portfolio of bank lending underwent a “seismic shift” from safer residential mortgages to commercial and development loans, which rose to account for about 50 per cent. These were more risky, not equally distributed among banks and limited to a relatively small number of borrowers.

Prof Walsh said lending institutions had to adhere to International Accounting Standard 39 which deals with financial instruments. While the very specific risk nature of bank loans would not necessarily be required in their reporting under regulations there was nothing preventing them from doing this voluntarily.

Fianna Fáil finance spokesman Michael McGrath asked Prof Walsh about the PwC in his title “PwC Professor of Accounting”. He responded that it was due to previous funding received by the university from PwC but that he had no obligations to the accountancy firm at all.

Mr McGrath said his question was in the interest of full disclosure and that he was not suggesting anything improper.

Earlier in the hearing, economics professor Gregory Connor, an expert in economics, finance and accounting based at NUI Maynooth, said the Central Bank in Ireland was second only to Iceland in terms of its mistakes.

He said whereas central banks in other countries like Spain were “more modestly too risky”, Ireland was “really excessively too risky”.

“It took the spirit of the times and really ran with it,” he said, explaining that while it had the power to intervene in the mounting crisis, it did not.

Throughout his contribution to the inquiry, Prof Connor placed the blame at the feet of both the Central Bank and the financial regulator, saying decisive action should have been taken as early as 2005.

He said the blanket guarantee was a “very costly error” and including the two most insolvent banks was an obvious error with a cost of €35 billion.

“The economy was going into a slump but it could have saved a big chunk of that money,” he said.

He said there was an aspect of blame and an aspect of cause to the crisis - bankers were at fault for taking too much risk while a culture of aggressive lending policy was the cause.

“Bank managers who knew they were taking too many risks are to blame,” he said.

He spoke about an atmosphere of rivalry created in the banking system, particularly naming institutions like Anglo Irish Bank and Irish Nationwide whose lending activities, he said, were “forcing banks to adopt more aggressive strategies”.