Bank of Ireland to quit second headquarters in 11 years 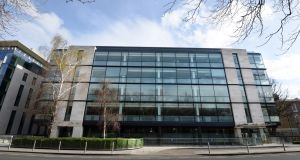 Bank of Ireland’s headquarter building on Mespil Road in Dublin. The bank is set to leave the property. Photograph: Dara Mac Dónaill

Bank of Ireland will quit its leased headquarters on Mespil Road in Dublin 4 later this year as it continues to reduce its central Dublin office footprint to save costs and prepare for a proportion of its staff continuing to work remotely after the Covid-19 pandemic.

The decision, confirmed by a spokesman, comes 11 years after the bank moved its head office from its former complex on Lower Baggot Street, which was its base for almost four decades. This is now home to the Department of Health and the local offices of Japanese pharmaceutical group Takeda, a legacy of its takeover of Shire in 2019.

The last of the three offices, a 129,700sq ft building known as Baggot Plaza, could be in line to become the new HQ, though there is speculation that the bank’s landmark premises on College Green in central Dublin, could again become its central address.

A spokesman for the bank said that the future HQ is still under consideration.

“In line with our continued strategy of increasing efficiency in how we work and reducing our costs, we will leave Mespil Road later this year,” he said.

“This means that over the past three years we will have reduced our office floor space across ROI and UK by almost 45 per cent. We are now providing a hybrid working model which gives colleagues greater flexibility to work from a combination of office and home locations, supported by enhanced technology.”

Before Covid-19 struck, the three central Dublin hubs were the bases for as many as 4,000 employees. But even then, the number of staff in the locations on a day-to-day basis was much lower as a result of a so-called agile workspaces scheme that allowed about a third of its workforce to work from alternative offices or home.

More than two-thirds of Bank of Ireland’s employees worked from home for most of 2020, a trend that has continued into 2021. Two internal surveys carried out last year found that three-quarters of staff wanted to operate from home for between 25 per cent and 75 per cent of their working week into the future.

The bank, led by chief executive Francesca McDonagh, saw its headcount fall by 6 per cent to 9,782 last year under an initial wave of redundancies under a voluntary severance scheme that aims to see 1,450 full-time equivalents leave the group on a phased basis to bring its staff numbers below 9,000 by the end of this year.

Bank of Ireland disclosed earlier this month that it is reducing the number of physical branches it has by 88 to 169 from September onwards.

The bank has cut its overall running costs from €1.9 billion in 2007 to €1.7 billion last year. It said earlier this month, as it reported an underlying pretax loss of €374 million for last year after setting aside €1.1 billion for expected Covid-related bad loan losses, that it plans to reduce expenses to €1.5 billion by 2023.

The Baggot Plaza property, which Bank of Ireland has rented since 2015, was sold by global real estate group Kennedy Wilson last October for €165 million to German property specialist Deka Immobilien.

Kennedy Wilson owns the Mespil Road property, while US private equity giant Blackstone received clearance from the Competition and Consumer Protection Commission last month to buy a controlling stake in the Burlington Plaza 2 property and a neighbouring building from Colony Capital.

In 2019, Bank of Ireland exit its leased New Century House offices in Dublin’s International Financial Services Centre (IFSC) as well as rented space in Hume House in Ballsbridge in Dublin 4.

10 What are the rules on inheritance for my family in Australia?