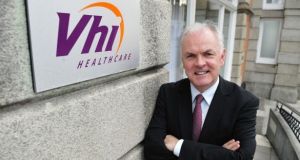 State-owned health insurer VHI is to cut the cost of its plans by an average of 2 per cent from July. The move comes after it announced a net surplus of €75.3 million last year as membership numbers rose.

VHI’s operating expense ratio to premium income was 7.9 per cent in 2017, broadly in line with the previous year, the company said.

The organisation on Tuesday announced an average 2 per cent price reduction for its plans, which follows on from cuts announced in March and last November.

“The business continues to perform well, a consequence of a strong underlying membership performance and an unrelenting focus on cost and financial management,” said chief executive John O’Dwyer.

“This consistent strong financial performance allows us to continue to reinvest our profits back into the business directly for the benefit of our customers,” he added.

Mr O’Dwyer warned however that with the population continuing to age significantly, the Irish healthcare market faces challenges in the years ahead.

The Irish Times reported in December the group was looking at acquiring or buying into private hospitals in what would represent a major change to its traditional business model.