Ireland fourth most expensive EU country to live in 2016 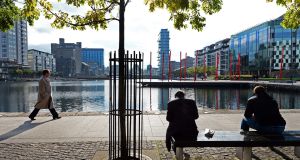 The Irish had the highest labour productivity among EU states in 2016. Photograph: Eric Luke

You may not believe it, but Ireland actually got less expensive as a place to live when compared with other EU countries in 2016. However, sharp price growth across the region still placed Ireland as the fourth most expensive location in 2016, according to a new study from the Central Statistics Office (CSO). It also reveals that we are the most productive nation in the EU – but there is a significant cohort still living in jobless households and struggling to get back to Celtic Tiger employment highs.

According to a new document from the CSO, Measuring Ireland’s Progress 2016, Ireland had the fourth highest prices levels in the European Union in 2016, after Denmark, Sweden and Luxembourg. This is an improvement on 2015, when prices in Ireland were the third highest in the EU; however it doesn’t necessarily mean that price growth is slowing down – rather prices may just be growing faster in other countries.

The survey also shines a light on the proportion of people in the workforce. Ireland had an employment rate of 66.4 per cent in 2016, just below the EU average of 66.6 per cent, but significantly below Sweden (76.2%), Denmark, the Netherlands and Germany, at 75 per cent. The latest surge in employment means that the Irish rate is now just over four percentage points less than the rate in 2007 (71.7%).

However, while the proportion of females in the workforce is now almost back at 2007 levels, at 62.3 per cent, the number of males is still some way off, at just 72.6 per cent in 2017, compared with 80.4 per cent in 2007. The study also shows that the gender employment gap, in terms of the proportion of men in the workforce compared to women, has also slid, down to 10.3 percentage points, pitting Ireland mid-table – ahead of traditional Malta (25.6%) but far behind the forward thinking Swedes (2.7%).

We’re also the poster children of Europe when it comes to productivity. When looked at per hour, Ireland had the highest labour productivity among EU states in 2016 – almost four times that of the lowest, Bulgaria. It’s also about 78 per cent more than the EU 28 average; however, this jump is linked to the strong rise in GDP in Ireland in 2015.