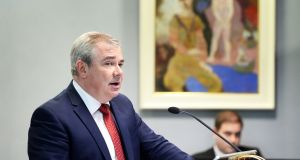 AIB wrote off €604.3 million worth of residential mortgage loans in the Republic last year, an increase of 35 per cent on 2014.

It wrote off an additional €214 million in other personal loans here last year, down from €385 million in the previous 12 months.

These figures emerge in the bank’s annual report for last year and suggest AIB is taking a pragmatic view to debt restructuring with borrowers.

The total loans written off by AIB in Ireland and abroad amounted to €4.6 billion last year, down slightly on 2014.

AIB’s results show it made a pre-tax profit of €1.9 billion in 2015, an increase of 72 per cent on 2014. This was driven by “high-quality new lending” and provision writebacks.

This profit figure allowed for exceptional items of €296 million, which included restitution, restructuring and voluntary severance.

It has made a €105 million provision relating to the Central Bank of Ireland’s sector-wide redress programme for tracker mortgage customers.

AIB’s pre-provision operating profit was 18 per cent higher at €1.3 billion.

The bank achieved a substantial reduction in impaired loans to €13.1 billion, down €9.1 billion from December 2014.

The bank, which is 99.9 per cent owned by the State, said new lending drawdowns amounted to €8.7 billion, a year-on-year increase of 49 per cent.

Its total operating income rose by 4 per cent to €2.6 billion while its net interest margin, a key measure of profitability, increased to 1.97 per cent from 1.69 per cent in 2014.

AIB had a cost-income ratio of 49 per cent as operating expenses declined by 8 per cent or €107 million.

Commenting on the results, AIB chief executive Bernard Byrne said: “There can be no doubt that the group’s financial performance has confirmed our transition from a work-in-progress to a fully functioning, sustainable well-capitalised bank.

“This bank is now well positioned to enable the State to recover its full investment of €20.8 billion.”

He said the bank was ready to IPO its shares subject to market conditions and the green light from Government.

Mr Byrne said it wasn’t a “big issue” if the mooted IPO in the third quarter of this year “slipped by three months or six months”.

“Obviously we would like Q3 because it takes away uncertainty and allows you to actually progress towards it but it’s not the big thing in terms of when it happens.”

“We have been inundated with calls from our members in AIB keen to know if this change of approach to remuneration has been evident in the pay talks with the bank’s senior management since late 2015,” he said.

“These talks have been protracted and difficult up to this point.

“However, I hope that in light of this disclosure about the increases paid to AIB’s highest earners, our members can now expect similar consideration when the current conciliation talks resume under the auspices of the Workplace Relations Commission. ”