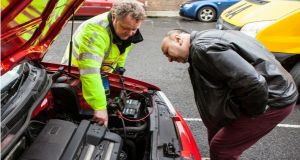 AA is to sell its Irish operation to Carlyle Group for €156.6 million

The competition regulator has given the green light to US investor Carlyle Group’s proposed €157 million takeover of motoring services specialist AA Ireland.

AA recently confirmed that it intended to sell its Irish arm to Carlyle for €156.6 million after putting the operation up for sale earlier this year.

The deal required the Competition and Consumer Protection Commission’s (CCPC) approval before it could go ahead. The commission said on Tuesday that it would approve the sale.

AA is best known for providing drivers with emergency breakdown repair and roadside recovery but it also sells motor and general insurance, offers traffic updates and other services.

It earned a pre-tax profit of €12 million and had assets of €163 million as of January 31st and employs about 480 people.

Former Bank of Ireland executive Brendan Nevin runs the business. He and his fellow executives will continue to do so after it is sold.

The CCPC said that its takeover by Carlyle would not substantially lessen competition in any market for goods and services in the Republic.

Carlyle is buying the company with its Irish partner, Cardinal Capital, through a special purpose vehicle, Selenium Designated Activity Company.

The deal is its seventh investment in an Irish company since it set up here in 2014 with €125 million in backing from the then National Pension Reserve Fund.

Among its other Irish investments are stakes in chocolate maker Lily O’Brien’s and payment processing provider Payzone.

Managing director, Peter Garvey, recently said that it would continue to look at other opportunities here and would take its time in light of the uncertainty created by the UK’s vote to leave the EU.

AA, which listed in 2014, said it intended to use the proceeds to repay part of its debt.