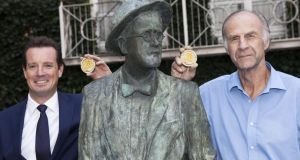 Conor McCarthy, director of Investec Corporate Finance, and Ranulph Fiennes: McCarthy had asked Fiennes to come to Dublin to give a talk to Investec’s staff and clients when they were competing in the Marathon des Sables. Photograph: Iain White /Fennell Photography

Regular readers might recall that, in April, we reported on the “mid-life crisis” fitness exertions of Investec Corporate Finance director Conor McCarthy.

While the rest of us were gorging on Easter eggs, McCarthy headed for the scorching Moroccan Sahara to compete in the Marathon des Sables, the equivalent of six marathons in six days billed as the world’s toughest footrace.

As McCarthy was trundling across the sand dunes, he bumped into none other than Sir Ranulph Fiennes, the explorer and all-round adventurer. Fiennes, who once hacksawed off his own fingertips after getting frostbite, became the oldest Briton to compete in the event, aged 71. McCarthy asked Fiennes if he would come over to Dublin to give a talk to Investec’s staff and clients, and yesterday the explorer duly obliged.

A crowd of about 150 assembled in the Clyde Court Hotel in Dublin to be regaled with his tales of trudging through the Antarctic and climbing the north face of the Eiger. Fiennes spoke about the importance of hiring the best people for your team: “you can fire someone while you’re in the middle of an ice-cap but you’re still stuck with them until the end of the expedition”. A bit like the civil service.

McCarthy paid tribute to Fiennes cumulative charity fund-raising record of £17 million. Investec should sign him up. Another couple of mountain jaunts, and he’d raised enough cash to fund a deal.

1 Bank leaked my loan request to family who tried to rip me off
2 Ryanair and Aer Lingus monitor impact of coronavirus on travel to Italy
3 EU and British positions harden ahead of Brexit talks
4 Boris Johnson's new immigration regime will damage much more than industry
5 Ownership row over properties threatens €5.1m sale, court hears
6 Mastercard to create 1,200 new jobs by expanding base in Dublin
7 Over $12m from sale of Walford handed over in Sean Dunne bankruptcy case
8 How can I view my dead brother’s will if I’m not the executor?
9 Bank of Ireland to sell distressed mortgages and cut costs as profits fall
10 Penneys owner warns coronavirus could threaten some supplies later in the year
Real news has value SUBSCRIBE