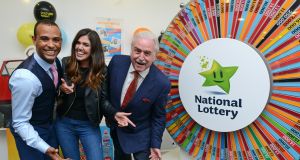 The money dates back to when the National Lottery was privatised and sold to Canadian-owned Premier Lotteries Ireland in 2014. Photograph: Dave Meehan

The operator of the National Lottery has agreed to have more than €16 million in unclaimed prize money, which had been the subject of a dispute, transferred to the exchequer to help support Covid-19 health measures.

The money dates back to when the National Lottery was privatised and sold to Canadian-owned Premier Lotteries Ireland (PLI).

When PLI took over the running of the business in 2014, there was an unclaimed prize pot of €16 million.

A dispute arose over who had the right to the money. The Department of Public Expenditure and Reform maintained the money should go to good causes via the exchequer as it was generated by the previous licensee, An Post.

But PLI insisted it was entitled to use the money on marketing and promotions as per the current rules.

Following an intervention by the National Lottery’s regulator, the row has now been resolved and the money is to be returned to the exchequer.

Minister for Public Expenditure and Reform Paschal Donohoe immediately welcomed the news and announced the funds would be used to support the health sector’s response to the coronavirus crisis.

National Lottery chief executive Andrew Algeo said the franchise was delighted to see the €16 million “used to improve health in our communities”.

Earlier lottery regulator Carol Boate said she had examined the issue and “concluded that there was no basis for the money to be used by the current operator”.

“This agreement with the operator now means the money can be returned to the exchequer without delay for use by good causes, further ensuring that funds for this purpose are maximised at this time,” she said.

Under the rules, lotto winners have 90 days to collect their prize, after which they forfeit any right to the money. After that point, the operator can then legally use the money to promote various games and draws either through jackpot top-ups or other marketing campaigns. The unclaimed prize pot has become a significant revenue stream for the operator, amounting to about 2 per cent of annual sales which equates to more than €16 million a year.

The biggest unclaimed win on record was for a €4.3 million jackpot, dating back to June 30th, 2001. The ticket was sold in Coolock in Dublin, and despite a campaign to find the winner no one ever came forward. More recently, a winning ticket worth just under €3 million sold in Mayo in 2014 went unclaimed.