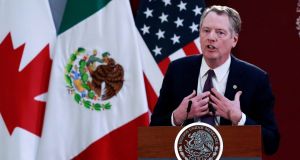 US trade representative Robert Lighthizer gestures as he speaks during a meeting in Mexico with Canadian deputy prime minister Chrystia Freeland and Mexican leaders on the USMCA trade pact which will replace the Nafta accord. Photograph: Henry Romero/Reuters

Only 60 per cent of the homes needed will be built this year, according to a new Central Bank letter. Peter Hamilton reports that it says we need to build an average of 34,000 homes a year for the next decade: this year, only 21,000 will be built. At a time, when politicians and builders are keen to point the finger of blame for rising prices at the bank’s mortgage lending rules, the report makes clear that the main issue is supply.

In his column, Ciarán Hancock says the only answer, especially in Dublin, is to build up, not out. Apartment living must become more prevalent, he argues.

And mortgage lenders have their own problems. Ultra-low interest rates, non-performing loans and the overhang of tracker mortgagers means Irish banks will struggle to avoid falling profits, warns ratings agency Moody’s as it lowers its outlook for Irish lenders. Joe Brennan has the details.

Ryanair managers won’t get access to their share option scheme unless the airline posts profits of €1.75 billion, it emerged in court on Tuesday. The latest projection is for profits of between €800 million and €900 million. Barry O’Halloran and Peter Hamilton report on targets that only emerged after The Irish times and others challenged a court gag.

Abroad, the big news is that US Democrats and the White House have hammered out terms that both can sign up to on the new United States, Mexico Canada Agreement (USMCA), which will replace Nafta trade accord, after what seemed like deadlock between the two sides. Suzanne Lynch in Washington reports.

Back home, Ireland’s top publicly-quoted company are getting their act together on gender balance in their boardrooms, a new report finds but “virtually no progress” has been made at smaller listed businesses, writes Laura Slattery

A shorter GAA season and Storm Emma conspired to rain on sports retailer Elvery’s which has reported a 67 per cent slide in profits for last year, writes Gordon Deegan.

Staying with sport, the 148th Open golf championship at Royal Portrush, won this summer by Shane Lowry, delivered more than €119 million of “economic benefit” for Northern Ireland, according to a report commissioned by the R&S, writes Francess McDonnell.

Finally, Wetherspoons will invest more than €237 million in pubs and hotels over the next four years, and founder Tim Martin still aims to build a 30-strong portfolio of Irish properties, writes Peter Hamilton. Dublin, Waterford and Galway are currently on its radar.