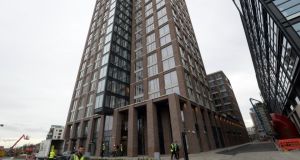 Ireland isn’t building enough new homes each year. So said the Central Bank of Ireland on Tuesday in a detailed economic letter that assessed population change and housing demand over the past number of years.

Tell us something we didn’t know.

According to the Central Bank, we need to build 34,000 new homes per annum out to 2030 but this year we will deliver just 21,000 new units. The figure required could actually rise to 51,000 units if household formations were to move towards UK levels.

Like Brexit, this issue is going to be with us for a long, long time.

Many developers point the finger for some of this at the regulator and its rules around mortgage lending, which they claim are strangling the market and making it impossible for young couples, crippled with runaway rents, to save the necessary deposit to get on the property ladder.

The Central Bank last week countered this narrative by estimating that house prices would have risen by another 26 per cent – to levels above the Celtic Tiger boom years – were it not for its macroprudential rules, which require first time buyers to have a 10 per cent deposit and limit how much they can borrow to 3½ times their income.

Either way, the mortgage rules are just one of the factors at play in a market with a lot of moving parts. Developers continue to pay mad prices for land, labour cost inflation in construction has soared due to a shortage of skilled workers, there are issues with the delivery of utilities and other infrastructure to service sites, and more besides.

Regular changes in Government policy, as it seeks to fight fires on several fronts in an effort to take some heat out of the housing crisis, have also had unintended consequences in the market.

A lot of builders sat on their hands this year to see if the Government would extend the help-to-buy scheme for first-time buyers beyond the end of 2019, on the basis that they couldn’t be sure they would be able to finance their projects or find enough people to buy the homes. The only got their answer in October’s budget.

To keep pace with the growth in population and changes in household formation, about 27,000 dwellings would have been required each year from 2011 to 2019. In the event, the report says, completions amounted to 10,500 a year, hobbled by the fact that the first three years of that period were spent in an EU-International Monetary Fund bailout programme. Just 4,600 new homes were built in 2013, the final year of our bailout.

A lot of these homes were of poor quality in design and build. Some were built in the wrong places. And a lot of them were sold at hugely inflated prices, funded by cheap and easy credit.

Mistakes from the recent past have come home to roost and we now find ourselves in the midst of a full-blown housing crisis, with too few units being built and soaring rents. Not only did we stop building houses during the recession but, despite our economic woes, the population increased sharply. Between 2011 and 2016, it rose by 173,000, due to a boom in births.

The Central Bank did some modelling on population growth out to 2051. At its most optimistic, the number of people in the State will rise by 1.9 million from the 2016 census level to 6.7 million in 2051. Using lower migration assumptions, the population will rise by one million over that timeframe.

Either way, we’re going to need a lot more housing to accommodate them all.

There is a glaringly obvious potential solution to our housing problem, as noted by the authors of the Central Bank letter – build more apartments.

Just 8.3 per cent of households in Ireland live in apartments compared with 14.7 per cent in the UK and just under 42 per cent in Europe.

Just over half of the population here lives in semi-detached houses while 40 per cent are in detached homes. This is no longer sustainable, particularly in Dublin.

There are some good reasons for this discrepancy in that the State is sparsely populated and there is little need or demand for apartments in rural Ireland. But there is in Dublin, where 27 per cent of the population lives, space is at a premium, and (as the Banking & Payments Federation Ireland noted last week) more and more people are being forced to buy homes in surrounding counties, with resulting long daily commutes.

We will need more high-rise blocks in the centre of Dublin, more shared living (however unpalatable that concept might seem), more build-to-rent schemes, and proper provision for social and affordable housing.

“Apartments need to become more and more the norm for urban housing solutions,” said a document in March 2018 from the Department of Housing, Planning and Local Government on design standards for apartments into the future.