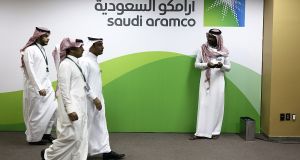 Saudi Arabia’s only solar plant in operation, aside from a limited pilot project, is a 10-megawatt facility on top of a parking lot at Saudi Aramco’s headquarters. Photograph: Simon Dawson/Bloomberg via Getty Images

Saudi Aramco, the world’s largest oil company, is considering as much as $5 billion of investments in renewable energy firms as part of plans to diversify from crude production, according to sources. Banks including HSBC, JPMorgan Chase and Credit Suisse have been invited to pitch for a role helping Aramco identify potential acquisition targets and advising on deals, the people said, asking not to be identified as the information is private.

The energy company was seeking to bring foreign expertise in renewable energy into the kingdom, sources said, adding that first investments under the plan could occur this year.

Saudi Arabia is planning to produce 10 gigawatts of power from renewable energy sources including solar, wind and nuclear by 2023 and transform Aramco into a diversified energy company. The kingdom also plans to develop a renewable energy research and manufacturing industry as part of an economic transformation plan announced by Deputy Crown Prince Mohammed bin Salman in April. Saudi Aramco, HSBC, Credit Suisse and JPMorgan declined to comment.

The country’s energy minister and chairman of Aramco, Khalid Al-Falih, said at the World Economic Forum in Davos, Switzerland, that Saudi Arabia intended to become a global powerhouse of renewable energy, including solar, wind and nuclear power. By 2030 the kingdom wants to produce 30 per cent of its power from renewable energy sources.

Opec’s biggest crude producer is embarking on a domestic renewable-energy programme costing $30 billion-$50 billion. The country’s only solar plant in operation, aside from a limited pilot project, is a 10-megawatt facility on top of a parking lot at Saudi Aramco’s headquarters.

The national utility, Saudi Electricity, is seeking bids for two solar plants to generate a combined 100 megawatts. Saudi Arabia previously had longer-term targets for renewable power when crude prices were about double current levels. Its earlier solar programme forecast more than $100 billion of investment in projects to produce 41 gigawatts of power by 2040.

The government delayed the deadline for meeting that capacity goal by nearly a decade in January 2015, saying it needed more time to assess the relevant technologies. – (Bloomberg)

1 Identigen founders make €12m each from sale of company
2 State’s biggest landlord records 30% rise in rental income
3 What will the office market look like after the great remote working experiment?
4 MSD buys Takeda biologics plant in Dunboyne
5 Nine Goodman companies made largely untaxed profit of €170m
6 Revenues almost doubled at Voxpro ahead of €150m sale
7 More than 1,200 tracker-mortgage complaints await ombudsman ruling
8 Trump’s TikTok move may have far-reaching consequences
9 How safe is it to go back to the office?
10 Why the Covid-19 crisis may push up house prices
Real news has value SUBSCRIBE